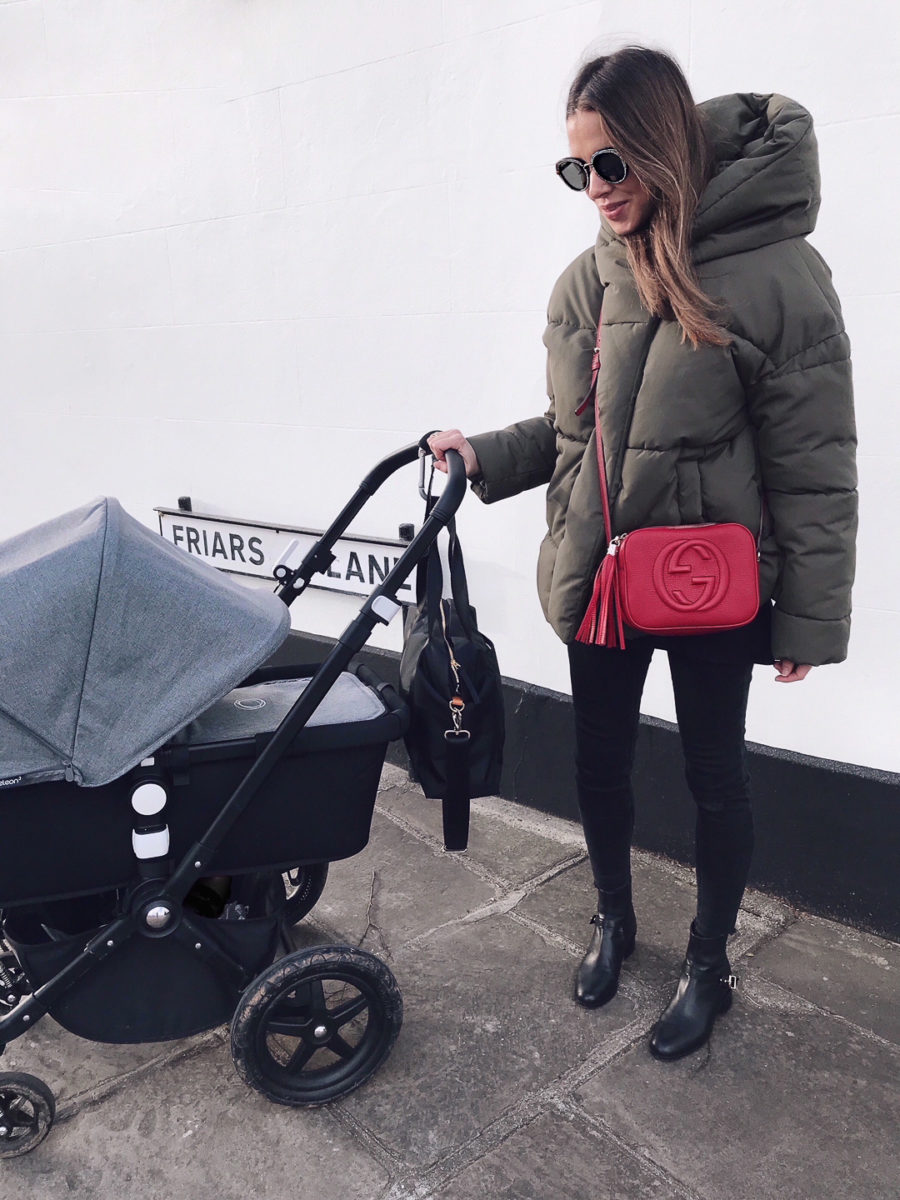 I can’t believe how fast time has flown by, and that Rio is now 15 weeks already… I’ve been getting a lot of requests to share more about motherhood with Rio – my schedule, sleep, activity, etc. So I thought I would give you guys a little insight into what I’ve been doing, what’s worked/what hasn’t worked, and why I decided to create a routine with him already at 7 weeks….

Since birth, Rio has generally been a pretty easy and content baby. Obviously, I didn’t really know what I was doing the first few weeks, and I’m still trying to find my way, and continously learning something new about him (and me!), every single day. Motherhood as I know it, only 3 months+ in, is incredibly challenging. And that’s totally what I expected it to be. However, there’s a lot of things I didn’t know about (which funnily enough, no baby book can quite prepare you for), and lots of roller coaster emotions which hit me like a shovel in the face (the best way to describe it). But I love it, and I wouldn’t change it for the world. I feel so blessed to be a mummy, so blessed to have Rio as a son. And although I would give a lot for a full nights sleep (just one!), I genuinely miss him when he sleeps, and look forward to every waking moment with him. And I can’t wait for this crazy journey to properly begin… 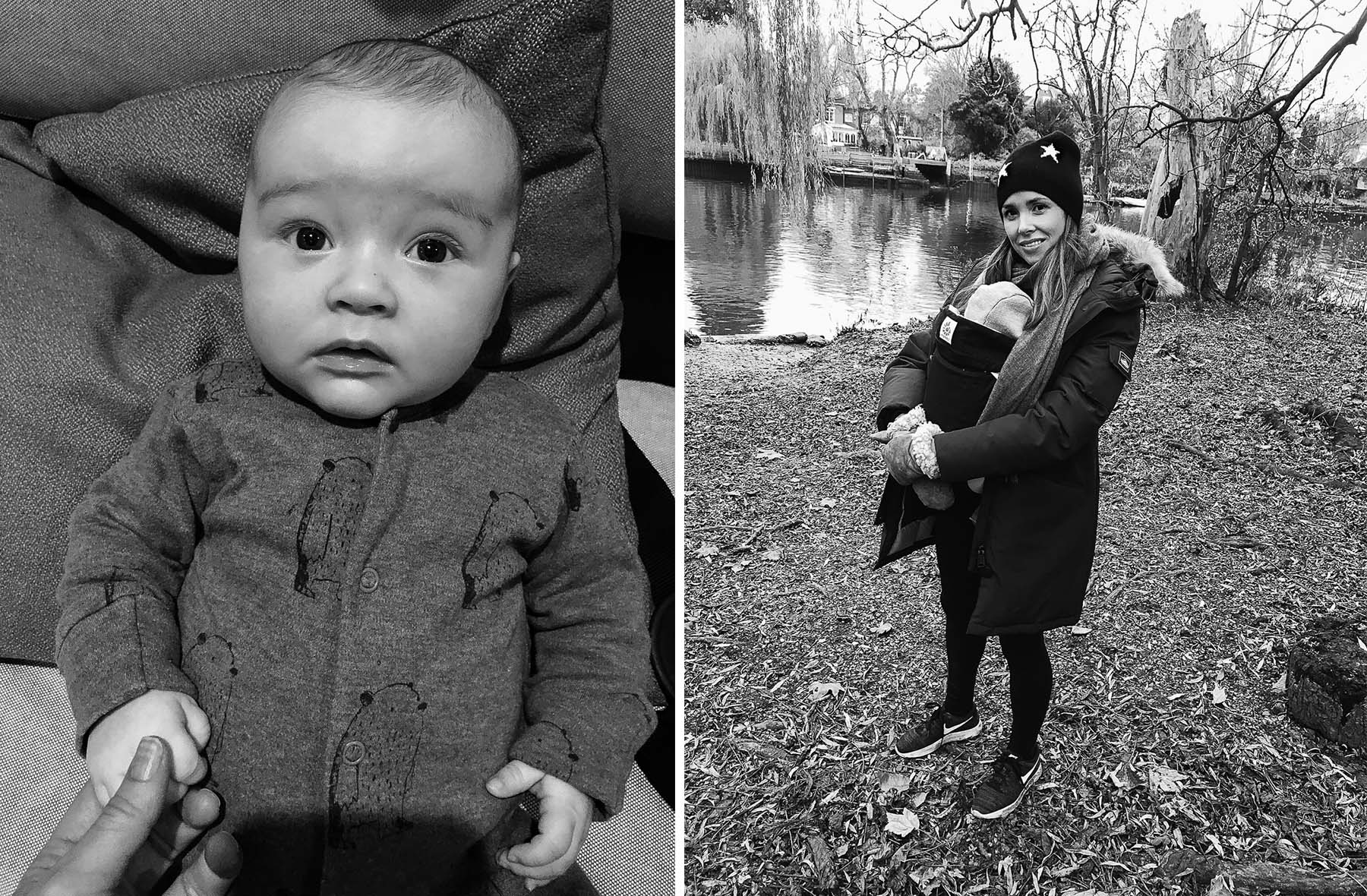 Getting Into a Routine

In the first few weeks with Rio, it was all about taking his lead – feeding on demand, soothing him when he cried, and just generally being there for all of his needs 24/7. As he was already a really healthy weight when he was born, at 8.2lbs/3.7kg – and has been following his percentile week by week – I decided that after 7 weeks, I would slowly start introducing more of a schedule for us (spreading out the feeds and sleep, basically). I say ‘us’, as it was just as much for me, as it was for him. I’m naturally a very organised person who generally likes a routine, and although I totally gave away to that in the beginning and just went with the flow (which was pretty amazing too) – I decided that for my own sanity, and to also know what I was doing on a day-to-day basis – to introduce a set feeding and sleeping schedule with Rio.

There are so many methods out there, and although I’ve both bought, and been given various books, with countless different methods and routines; in the end, I decided to follow the E.A.S.Y routine (Eat, Activity, Sleep, You) taken from the Secrets Of The Baby Whisperer book – which ironically was one of the mounds of books I didn’t own, but I managed to find a sample schedule online for the E.A.S.Y concept (I just googled it) – adjusted it slightly to make it work for us – and have been following it ever since.

Having a routine, gives me more of a purpose every day. I know what I am doing, when he needs to feed, when he needs to sleep, when it’s play time and when it’s bath/bed time. Of course, every baby is different – but I genuinely believe that introducing a routine into Rio’s days pretty early on, is the reason Rio has become such a happy and content baby. He now knows what’s happening, and when it’s happening. And since having this schedule, it’s also enabled me to more easily plan my days, and know what I’m doing; when to go for a walk in the park, meet up with friends at a cafe, do some work, run errands, weekend lunches with my husband, etc… The only minor downside to having a set routine, is when we fall out from it (which has happened many times, due to travelling, having visitors, heading into town, etc.) – it can really unsettle him, and he’s no longer such a happy baba! But again, as he’s generally pretty easy to calm down, I’ve found that he quickly jumps back into the routine after just a few cycles.

So I’ve been following the E.A.S.Y routine, which was the one that resonated the most with me; I like the way it really focuses on distinguishing all the different parts – feeding, playing, sleeping, and if I’m lucky, some me time. As I already mentioned, I didn’t actually get the book behind it, as I didn’t want to get too overloaded with information; so I’ve just been following the set timings, which are also divided into the different phases/ages. I’m currently following the 6 weeks – 4 months routine, which is the 3-hour cycle (following the feeding cycle of 3 hours, and then working everything else in-between). Again, every baby is different – some babies might not like regimental schedules, but for us personally, this has made things a lot easier. Note: this is an adjusted version of the textbook routine. 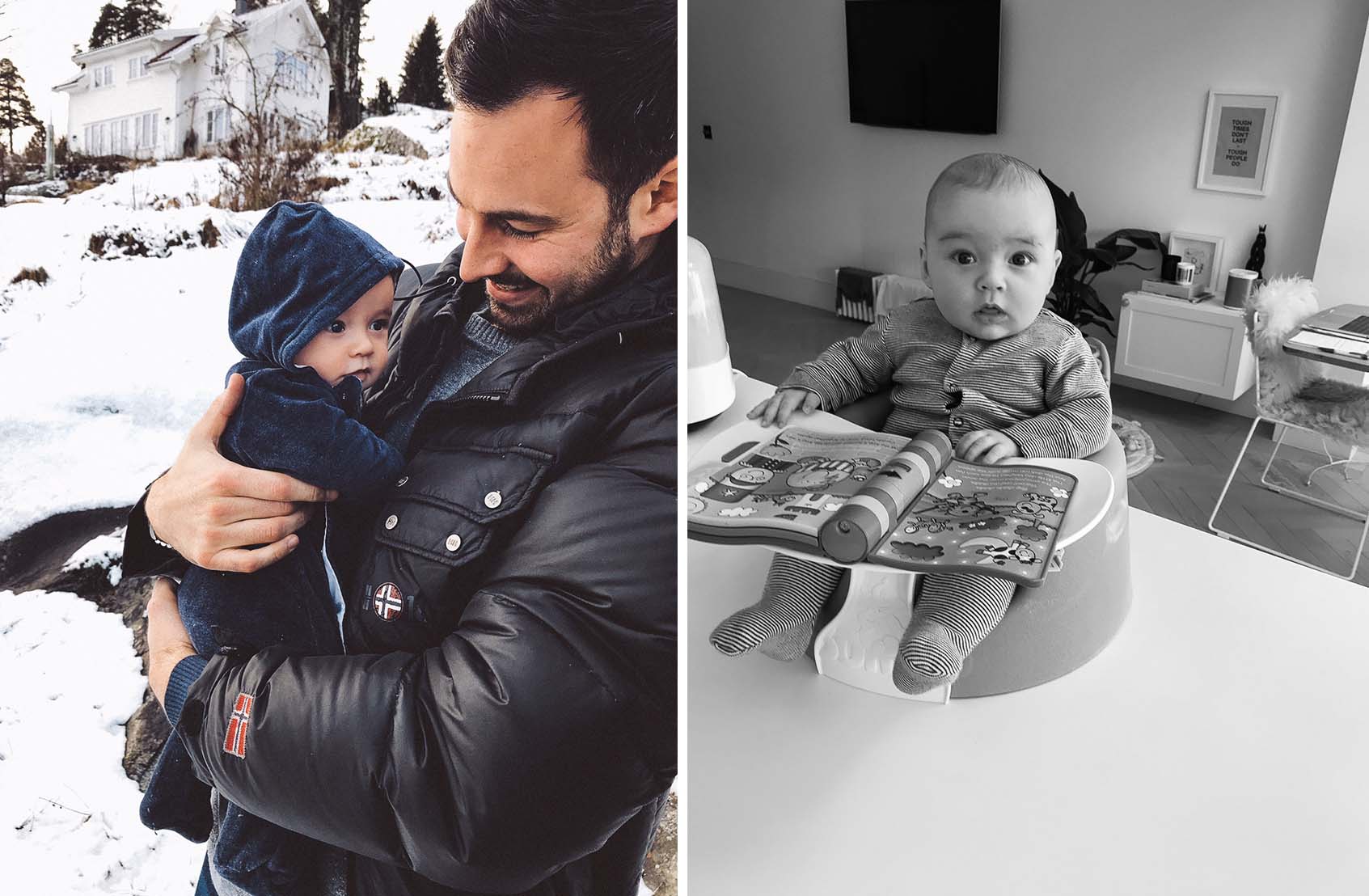 Sleep. Ah, what I would do for a full 8-hours sleep right about now! I don’t think I quite realised how bad the sleep deprivation would be, and my biggest advice to any new mum’s: sleep, sleep, sleep, as much as you can! When that said, our situation is certainly not the worst, but it’s by no means easy.

The first month or so, when I was still feeding on demand, it was pretty relentless. Naturally, I was sleeping really light anyways, checking in on him every hour, so I was pretty much up the whole night. But fortunately during the first few weeks, you find yourself running on adrenaline at all times, so it did somehow seem easier… Although that whole period just seems like a massive blur to me now.

As soon as I stopped feeding on demand and started a routine with him, his sleep also started getting better, and more consistent. Going from waking every 1-2 hour, to waking every 3 (sometimes 4) hours. So if I was lucky, his first wake-up (after going to bed at 7/7.30pm), would be anything between 12-2am – so a good solid 5-7 hour long stretch. Then the second wake up would be anything from 3-4am. So generally, two feeds each night. Which to some might sounds easy, and to others, pretty painful! To me, that’s been my ‘normal’ for the past 8 weeks. At times it’s been so hard, that constant broken sleep throughout the night… But then I have somehow just got used to it. At 10/11 weeks we tried to introduce the Dream Feed (using expressed breast milk in a bottle) at around 10.30pm, to try to take him through the night, or at least cut out one of the two feeds – but that turned out to be the worst idea… I understand that it works miracles for so many people, but it totally messed everything up for us. The first two nights it seemed to work (it cut out one of the feeds) – then it suddenly started making him even hungrier, and suddenly he was back to waking every 1-2 hours, wanting food! So after 7-10 days of trying this every night (in hope that it would change), we gave it up, and went back to the same schedule as before.

In this last week, we’ve had some really good nights, with only one feed during the night (which to me, is totally doable). And I have also learnt to distinguish when he is actually hungry, or just being fussy during the night. As he’s currently sleeping in our room in his crib, I’ve also read that babies can be noisier and more agitated when they can smell your breastmilk. So I decided to move him away from lying beside me, to the end of the bed. We’re not quite ready to move him into his nursery just yet, but might be considering it soon!

What we are super lucky with, and which has been pretty consistent from the start, is that he always self soothes and goes straight to bed when we put him down for the night at around 7pm. We swaddle him, put the same music on every night, then he typically goes straight down. And if he doesn’t fall asleep straight away, he will eventually drift off, with no fuss. I count ourselves very lucky with that, and I do perhaps think that this is due to the consistent ‘winding down’ routine we have with him every evening; gentle playtime, bath, massage and a long feed. 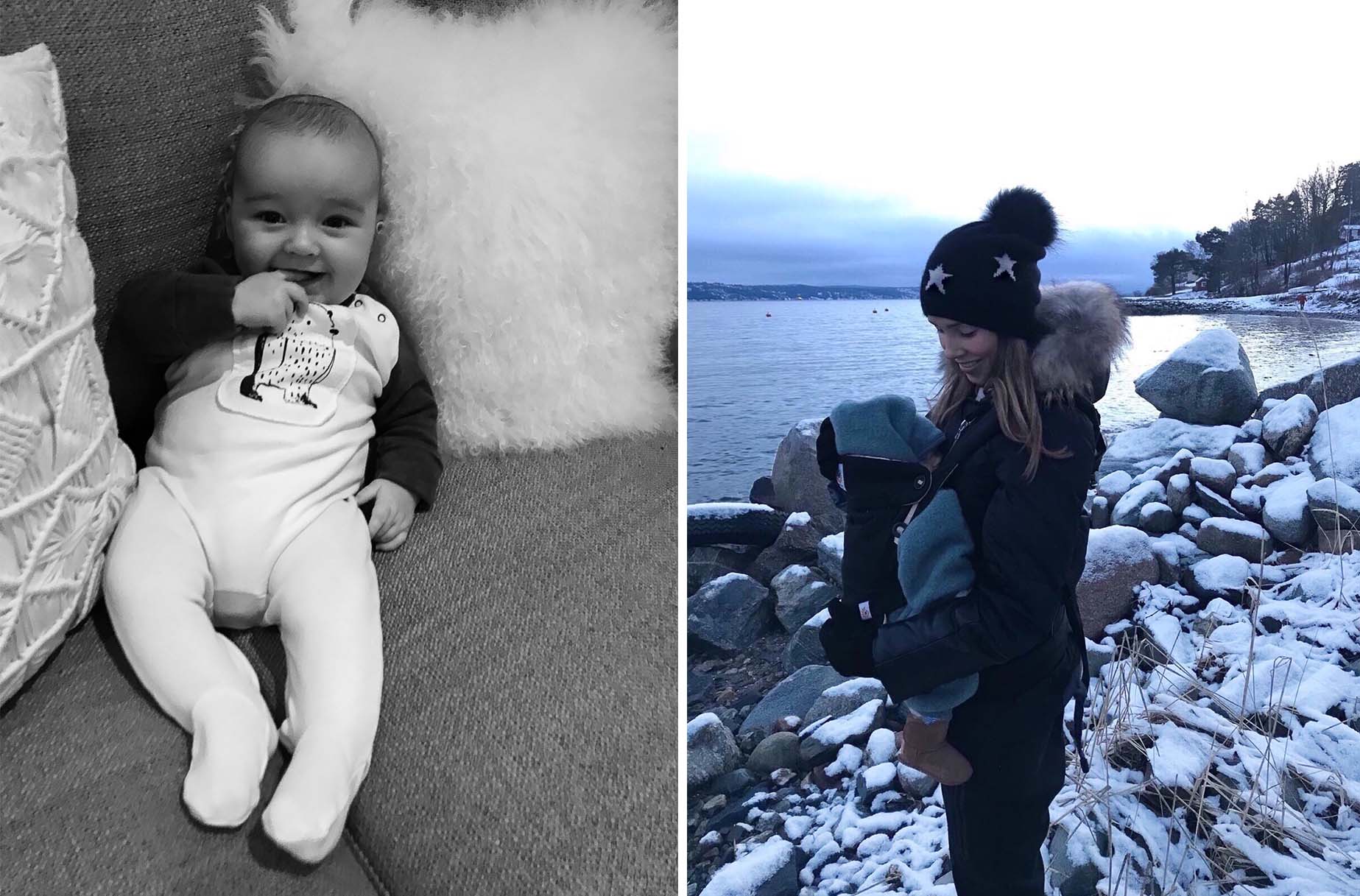 Don’t get me wrong; it’s not been a straightforward journey, but I am genuinely loving everything about being a mummy. I remember before I had Rio, I was saying to Sam how worried I was that I wouldn’t be a good mother, that I wouldn’t know what to do… Even though we had prepared ourselves as much as we could, with various courses, read stack loads of books, etc. But as soon as I held him in my arms, everything that followed just came natural to me. Suddenly, I just knew what to do; how to feed him, how to hold him, how to soothe him… It was so magical. I now know why they talk about the ‘mothers instinct’. Somehow, you just know.

This natural instinct has continued throughout, and many times I have surprised myself how calm I have become as a person in general. I’m naturally a worrier, I easily get stressed and I’m over-sensitive (a true Cancerian, in other words) – but I swear becoming a mother has changed me. All for the better. Even my family and husband has seen a huge change in me. I guess a lot of it has to do with being so grateful and blessed to have him in our lives. A feeling of real contentment. But I also want him to be happy and relaxed, so again, that natural instinct to stay as calm as possible when I am around him, has been there from the very beginning. Don’t get me wrong, there has been many times where things have become slightly fractious… But overall, and so far – I am loving this new side of me when I’m with him.

My general well-being is pretty good – in the beginning, I was just living off fast and easy, high energy food, to keep me going. And with the breastfeeding, I have been hungrier than ever. Getting back into shape and loosing weight, was not even a priority in the beginning. But the weight quickly dropped off in the first few weeks, which I’m sure was due to the breastfeeding, and daily walks in the pram. During Christmas, there was a lot of cake and sweets, but for the past few weeks, I have jumped back into a much more healthier routine and finally started working out – which I will be dedicating a separate blog post for, so stay tuned! 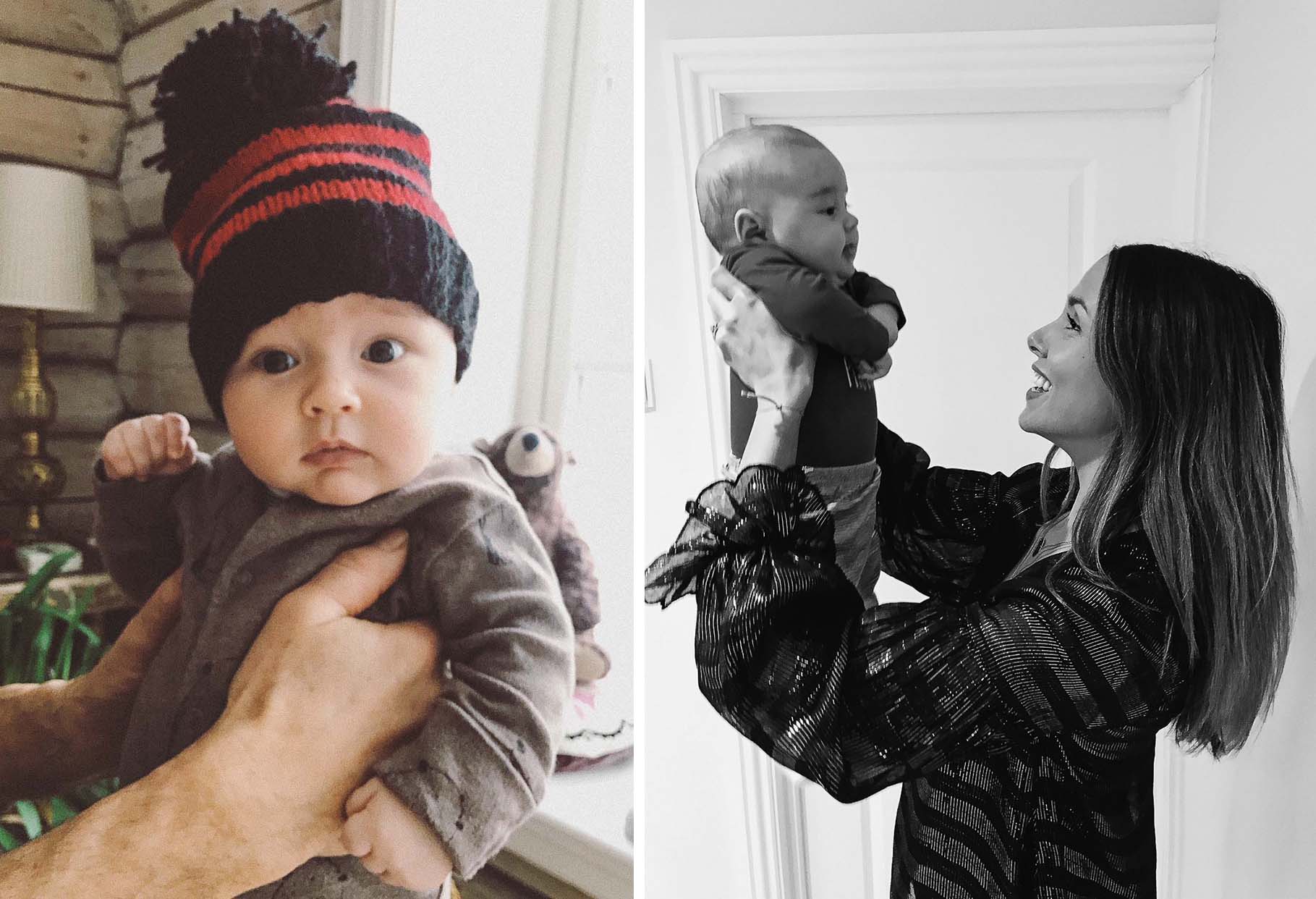 Please leave a comment below, or drop me an e-mail, if there is anything else you would like me to cover in my next update!