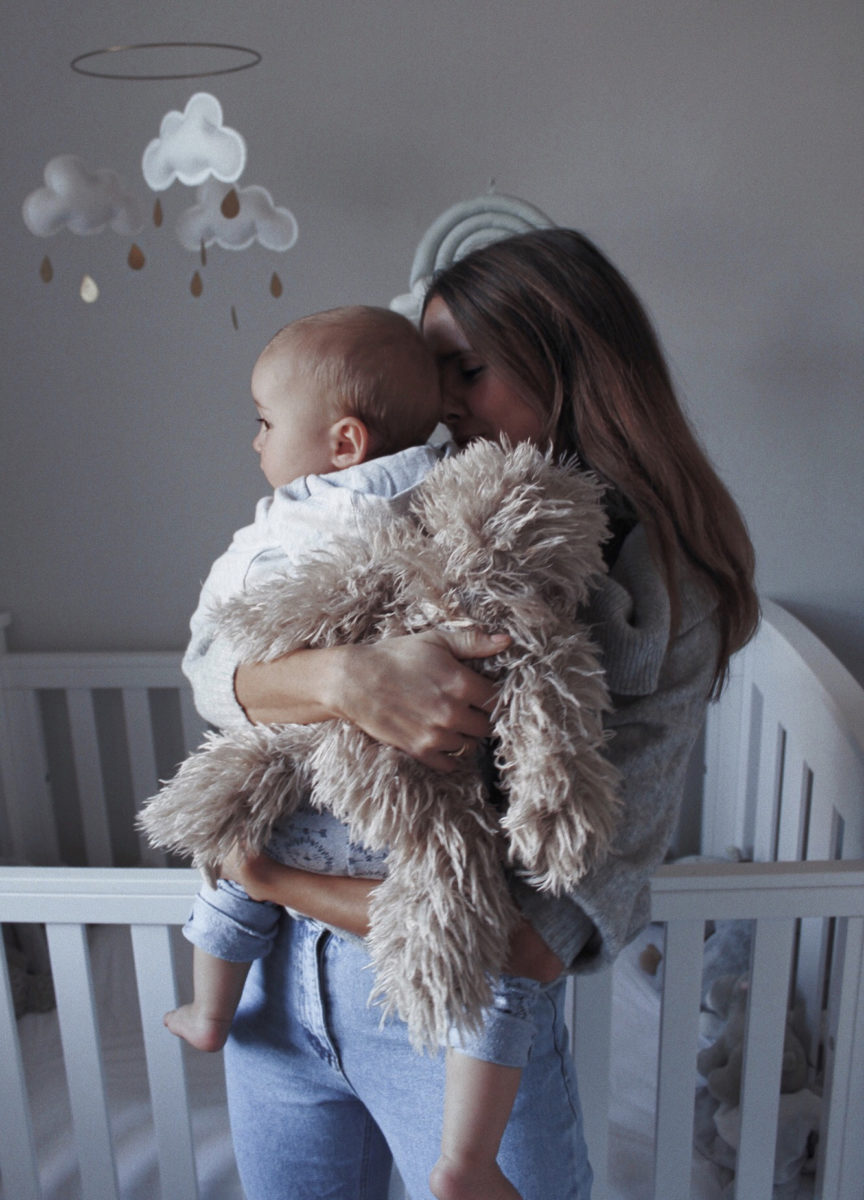 I know I keep saying this every single update, but I really can’t fathom how fast this year has gone! This time last year Rio was only 3 weeks old, and I was in a total bubble of love and bliss (running on adrenalin), yet a degree of pain (breastfeeding/Mastitis), and totally overwhelmed. I now look back at this time and can truly say that, despite the discomfort I was in, it was probably the happiest I have ever been in my life – and if I could turn back time to this little bubble I was in with Rio, I would. That’s not to say I’m not happy now, but that precious time right in the beginning, was incredibly magical. So much has changed these past 12 months, and there’s been a lot of ups and downs, tests and trials every single day, and most notably, I have grown and developed more than I thought I would (in a good way). This is the last update for now (I might check in at 18 months, and will no doubt be covering certain subjects as well – make sure you e-mail or leave a comment with your requests!). So here goes, Rio and mummy at just gone 12 months. 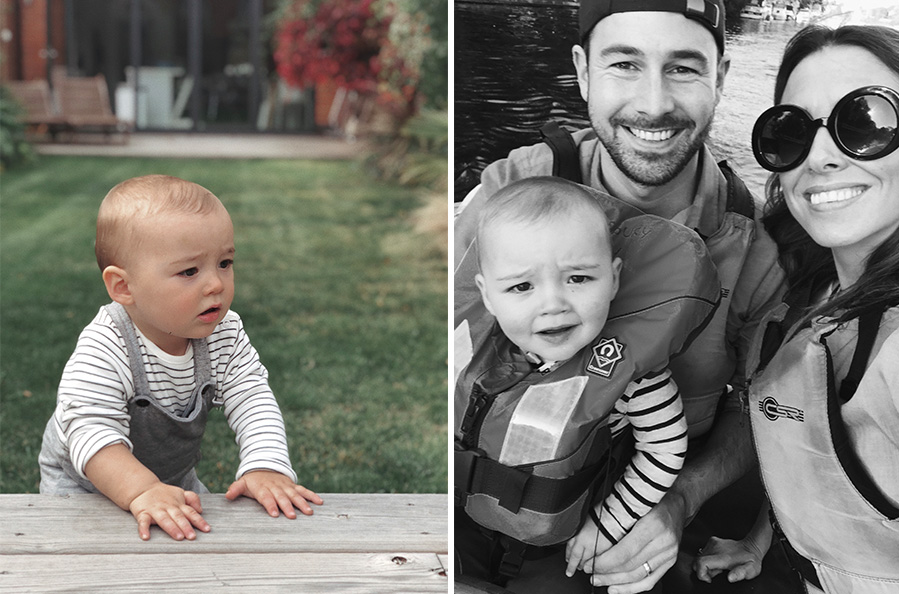 The biggest change since the last update, is that I’m just down to one breastfeed per day. Since last time, a lot has changed in the last 6 weeks, as I cut out the 3pm feed, and for the past 2 weeks, I have cut out the evening feed (so I’m just giving him milk in the morning at 7am). I always thought I would keep the evening feed until last, but for us, it was easier to drop this one, for two reasons: it’s so cosy in the mornings having him in bed with me when he’s just woken up (and I’m still half asleep), and Sam gets to be a part of the feeding process too, as he’s now giving him a bottle most evenings. As Rio was just over 12 months when I decided to drop this feed, we went straight onto full fat organic cow’s milk, instead of formula – and fortunately he loves it (having had a bit of cow’s and goat’s milk in his food since 6/7 months of age), so it’s been the smoothest transition for us to be honest. Fortunately he’s a very hungry boy, so he drinks up a bottle of 180ml every night and goes straight to sleep. I felt very emotional the first few times, as he moved so quickly onto the bottle and didn’t seem to miss/want my boob at all (sob!), but now I feel more liberated and free in the evenings, which is a pretty nice feeling to be honest.

In terms of sleep, he’s still doing the same as last time – with 30-60 minutes in the morning (depends on whether he’s in his pram or nursery) and 1-2 hours in his nursery during lunch. He’s still not having that consistent 2 hour nap during lunch, and I have been tempted to cut down his morning nap, to make his lunch time sleep longer, but for now, I’m just going to (hope) that this is something he will naturally do on his own.

To summarise the feeding and solids below, Rio now has 2 milk feeds (1 breastfeed, 1 bottle of cow’s milk), 3 solid meals, 2 snacks in total every day.

Going forward, I will continue with the milk feeding as is, and then eventually when I’m 100% ready, drop the breastfeeding altogether. 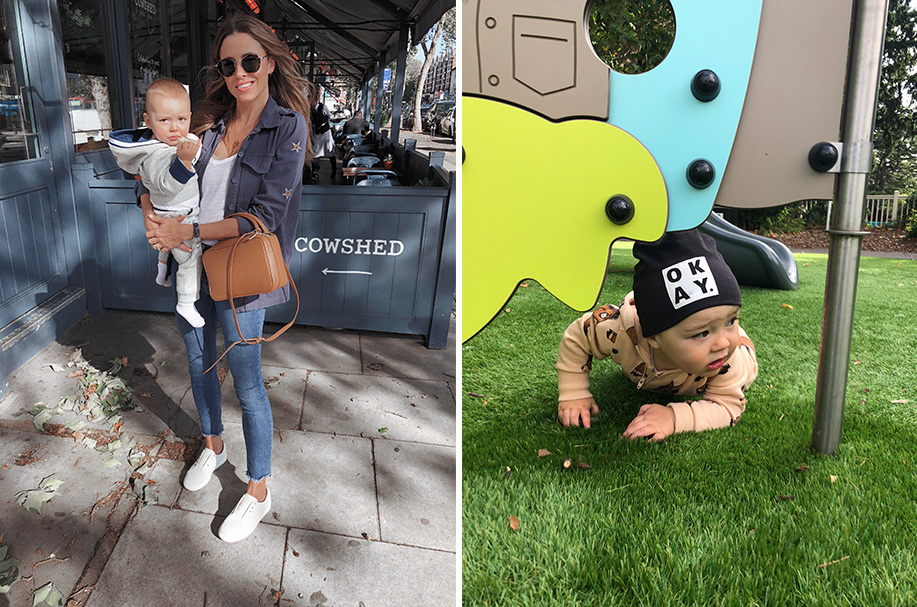 Sleep has been pretty good to be honest! Of course, we have good and bad nights (all depending on new teeth, illnesses etc.) – but overall, his sleep has been consistent, and fortunately, he’s no longer waking up at 5.30am. He now goes down at 7pm and sleeps right through to 6/6.15pam, which I’m really happy with. If he ever wakes up earlier than this, we often just let him settle himself back down, which tends to do the trick (most of the time). 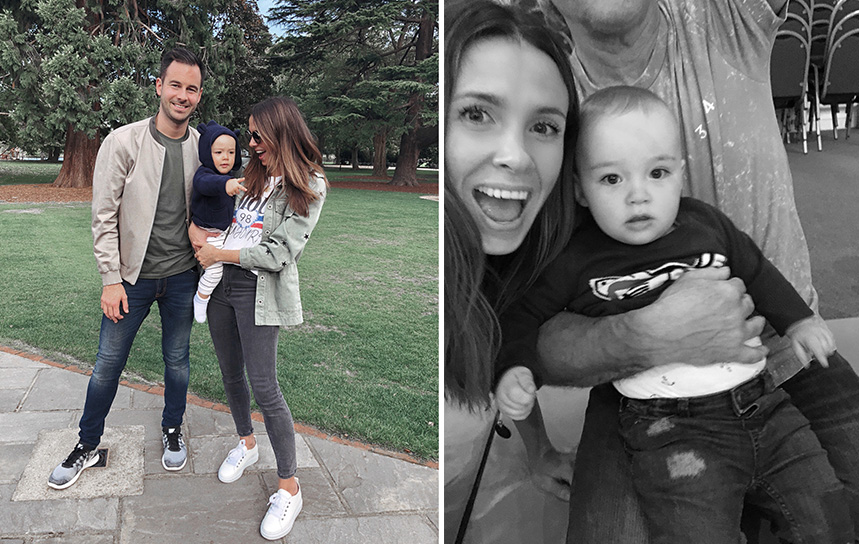 As mentioned, I’m just down to one breastfeed a day, and I thought the cutting down was going to be more emotional and hard (for me), if I’m being honest. It just naturally slowed down when he started consuming so much more solids, and I realised it had become more for comfort than anything else. So for now, we’re on one breastfeed a day, and will continue this until it feels right to finish off altogether. Also as promised, a full breastfeeding post will be going live really soon! I wanted to publish this 12 month update first, and then finish off with my breastfeeding journey. So stay tuned for this in the next few weeks. 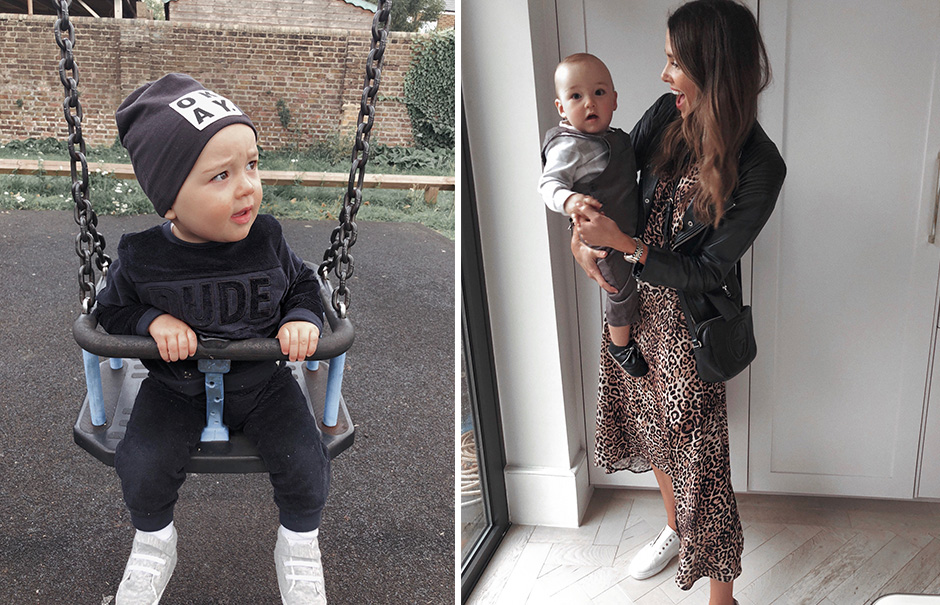 In last month’s update (read it here) I spoke a lot about Rio’s meals and shared several recipes and typical meals I give him throughout the day, and not a lot has changed since then to be honest. I’m continuously experimenting with new recipes and foods (when I find the spare time). He’s such a good eater overall and has a very big appetite, but these past few weeks, he’s started becoming a bit more picky (which is a first). If it’s something he doesn’t fancy or he doesn’t want any more food, it will go straight on the floor. So it’s definitely been more testing as of late, but overall I count us very lucky in terms of him eating such a varied (and big) diet. 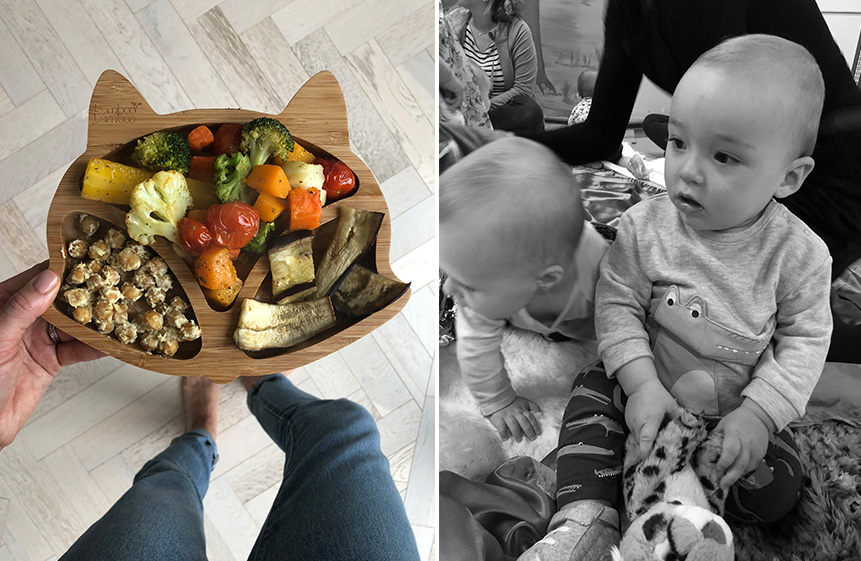 So Rio is still not walking, although he’s so close! He’s taken several steps, and is so sturdy on his feet, so I don’t know if it’s maybe because he’s that bit bigger in terms of balance, or the lack of confidence – either way, it will happen when it happens. We walk together a lot holding hands, and I’m pretty excited to take him to the playground so he can walk around and explore other activities on his own, other than just being pushed on the swing.

As he’s getting so much more alert, active and I can see how much he’s benefiting being around other children, I’ve really had to increase our activity levels each week – in terms of more play dates/groups, classes and excursions. As I’m still not planning on putting him into nursery (yet), and I still only have the nanny in 1 day per week – I’m really making sure he’s getting enough stimulation being around other babies. He has a lovely temperament most of the time, and is extremely content and happy when he’s with other children (more so than when he’s just with me on my own). He’s very energetic, curious and plays really well with other children. He’s been biting me quite a lot in periods, and has had a lot of tantrums and tears of frustration, which I know is very normal (although very testing and frustrating). As another, more experienced mum told me, ‘it’s just a phase’. 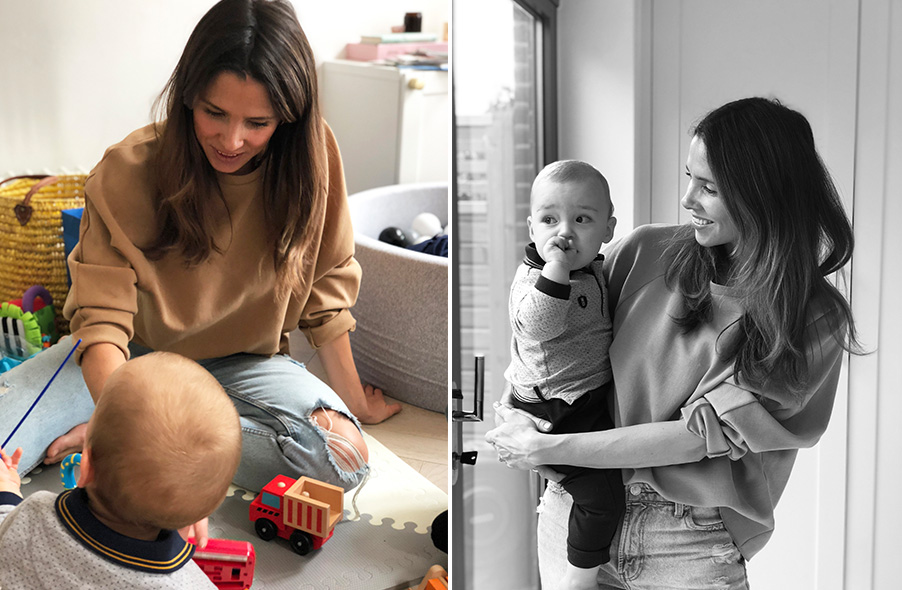 In terms of classes, we’re starting a new swimming term next week, then we still go to our weekly music class, sensory class and several play groups. I’m also going to sign him up to a soft play gym next month, which I’m sure he will love! Although we’re keeping active, we also have lots of downtime just us at home, which I think is really important too. Lots of reading and playing with all his new toys he got for his 1st birthday; the loves cars, trains, balls and books, and at the moment, we have three play areas in the house – one with his teepee in our study/playroom (we just got this new one from Wildfire Tepees via We.Are.Pop), his main play area in our kitchen/lounge, and upstairs in his nursery (which is usually more for downtime close to his sleep). We’ve also started using his strollers much more when we’re out and about (instead of his pram) – as they’re more lightweight and easier to cruise around in (we’re currently using the Babyzen YoYo and Ickle Bubba – both excellent!).

I have also finally started being more consistent speaking to him in Norwegian, which is good. I’ve found it quite tricky to be honest, as although it’s my mother tongue, I’ve lived in the U.K for 10 years now, and everyone around me speaks English, so it’s just not come natural to me switching over to Norwegian. I have been reading a bit of Norwegian to him up in his nursery for the last few months, and now I’ve started talking to him when we’re 1-to-1 at home. I have been told that consistency is key, so to not confuse him – the plan is speaking Norwegian to him when it’s just us, and when we’re out and about on play dates and classes, I’ll speak to him in English. 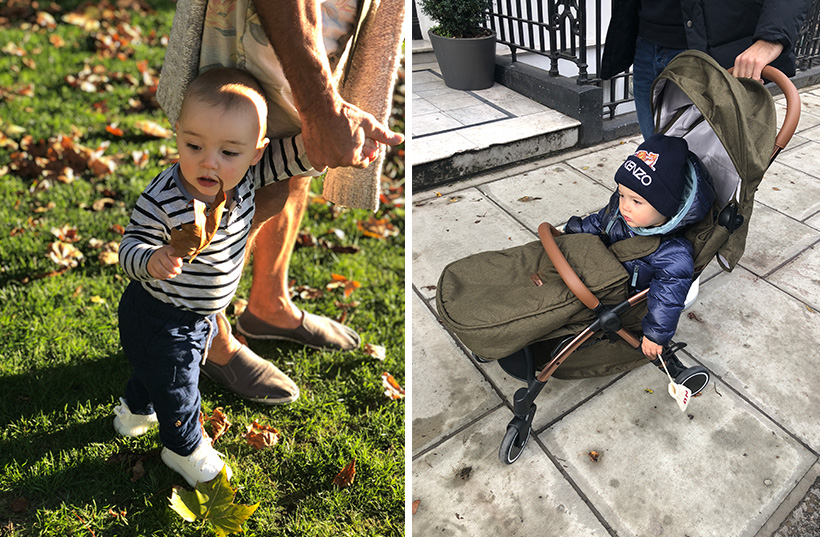 I know many mum’s bounce back quickly and don’t have a lot of health issues post baby, then there are the one’s who struggle with lots of complications (physically and mentally). I would say I’m right in-between this. Physically-wise, I did loose the weight very quickly after having Rio, and when I was breast-feeding at the most, I was thinner than ever (not healthier though). I’ve also been struggling a lot physically in terms of back issues (mainly lower back and shoulder), stiffness with the neck and grinding my teeth during the night (stress). So finding some me-time has not been very easy, but when I have (especially now with my nanny once a week), I’m making sure to prioritise my yoga classes, PT session to strengthen, acupuncture and thai massages to loosen and relax my body and mind.

12 months on, and I’m still trying to find that right balance between me-time and Rio-time. Of course, Rio is, and will always be my number one priority, but I’m finally realising that it’s important that I’m happy too, as the more I’m able to look after and focus on myself – be it a day into town with work meetings, writing the blog, getting my hair done, a gym class, massage – the better mummy I will be. The saying ‘Happy mama, happy baba’ rings true, and something I have to continue reminding myself (especially when the ‘mum-guilt’ creeps in). 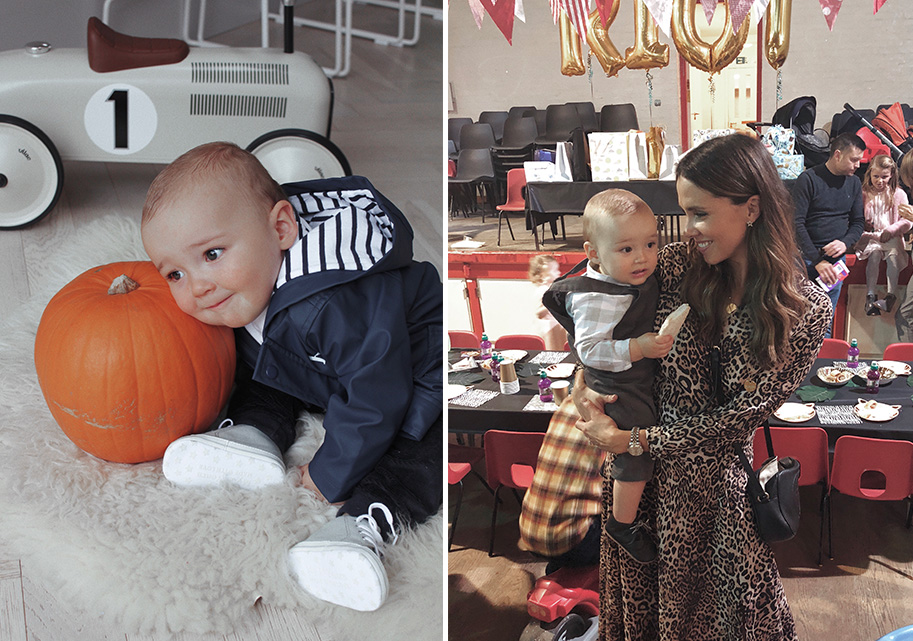 Learning to let go and take things more easy, in terms of Rio’s routine (be more flexible), not be so hard on myself (when thing’s don’t go to plan), and being more present when I’m with Rio (log off social media), is something I’m constantly working on. As you know, I started a routine with Rio when he was only 7 weeks old, which I’ve always said was more for me, than for him. It was a way of taking control when I wasn’t quite sure what I was doing, and it gave me a sense of structure and purpose in our days. Routine is great, and I wouldn’t be without it, but I think it’s time to take a bit of a step back, and not be so rigid with our routine. Not just for him, but again, for my sake! So I can be more flexible with our days, go and see friends during nap time, and have dinner out from time to time.

I’m not perfect; every single day I’m striving to be a better mummy – and I have a lot of bad days, amongst the good. But Rio is (most of the time) a very happy baby. He is so loved, so cherished and everything we do is for him. I need to learn, and remind myself that he will be happy, as long as I’m happy. Motherhood is a work in progress, and I find myself constantly evolving (for the better), so let’s see what the next 12 months bring! Until next time… 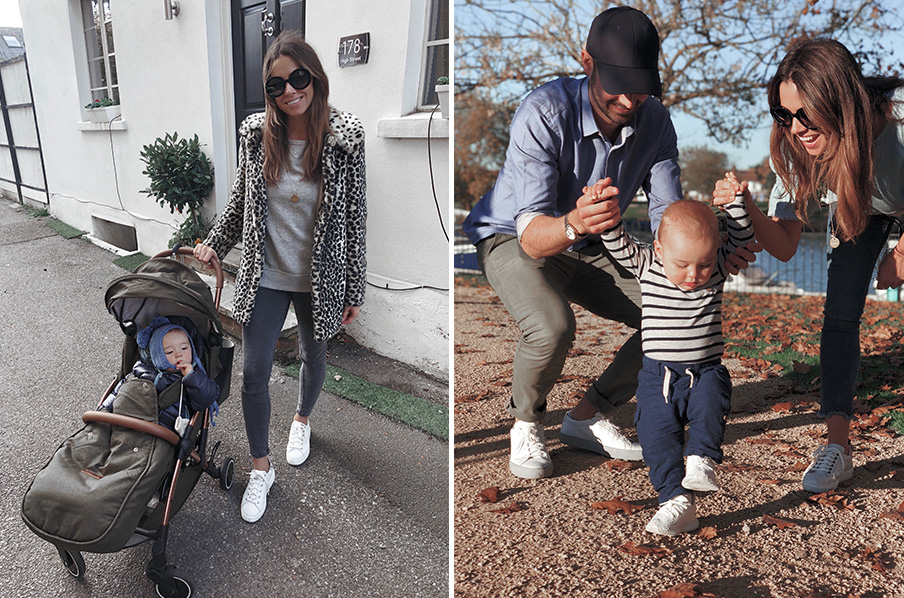 Please leave a comment below, or drop me an e-mail, if there is anything else you would like me to cover on the blog!