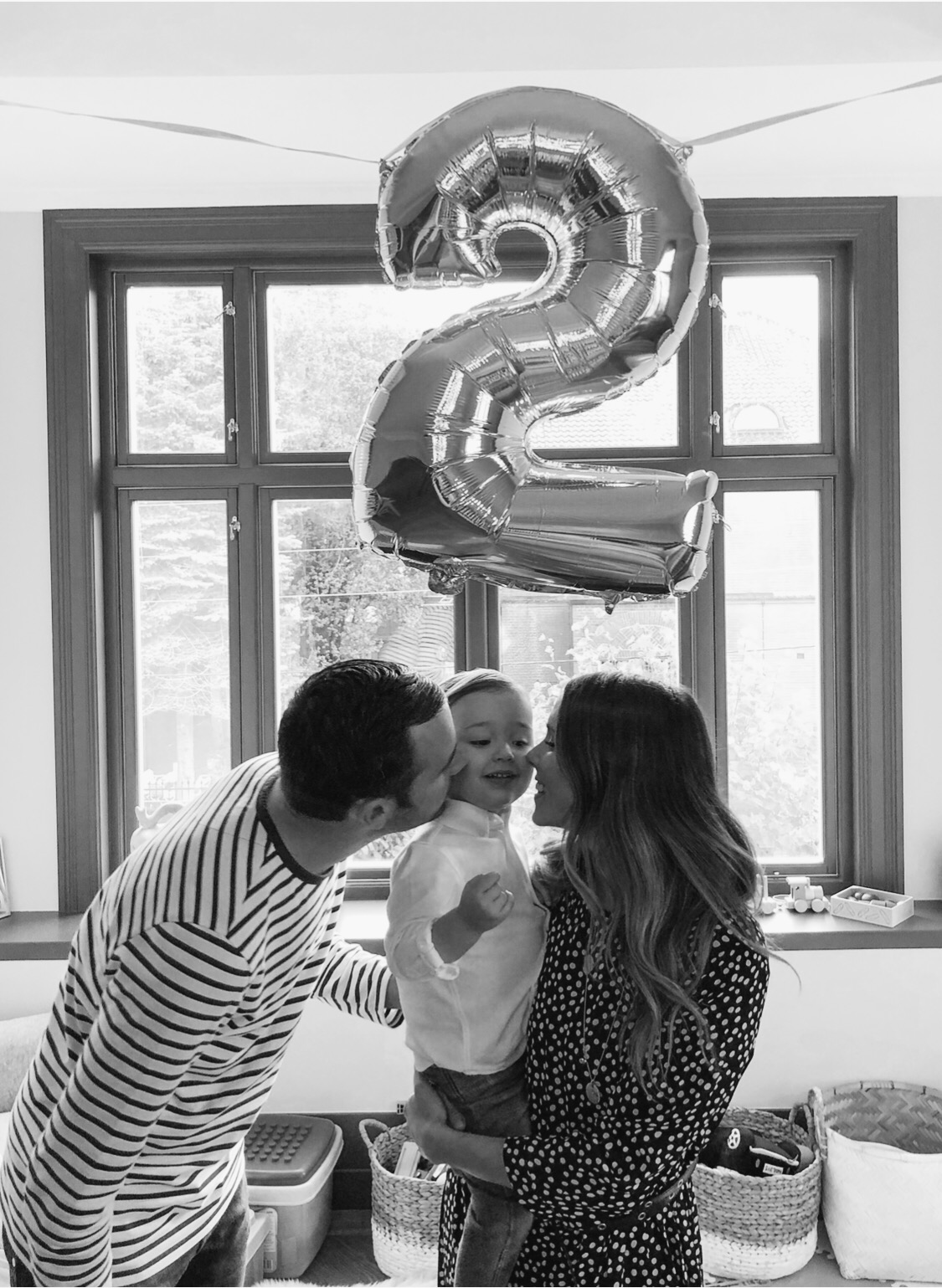 My last Mummy Diaries update, was nearly a year ago, and I can’t believe how fast those 12 months have gone by! Needless to say, a lot has changed for us. Not only with Rio, but with the obvious fact of deciding to move abroad, back to Norway, where we’ve now been living for over 6 months already. Rio turned 2 years old a few weeks ago, so now that he’s officially a toddler (eek!), I thought I would jump on here and share our updated routine, sleep, food & recipes, activities & development, nursery progress, as well as a little update on my own personal health and fitness, two years on. 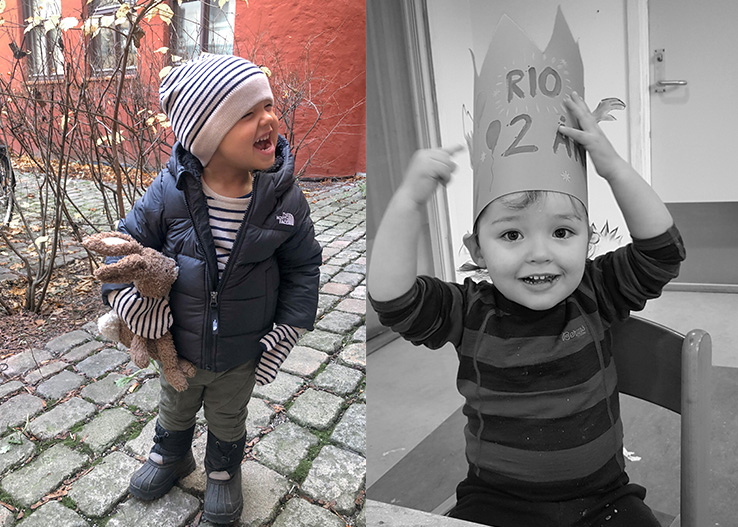 As Rio is now in full-time nursery here in Norway, I have based his current day-time schedule on his days here.

The next step in our routine, is cutting out his morning milk, which he no longer needs (nutritionally) as he has enough dairy from food, but it’s been a really nice morning routine up until now. We will continue the night time milk, but will be cutting it down to 150-180ml (as his nappies always get so full!). 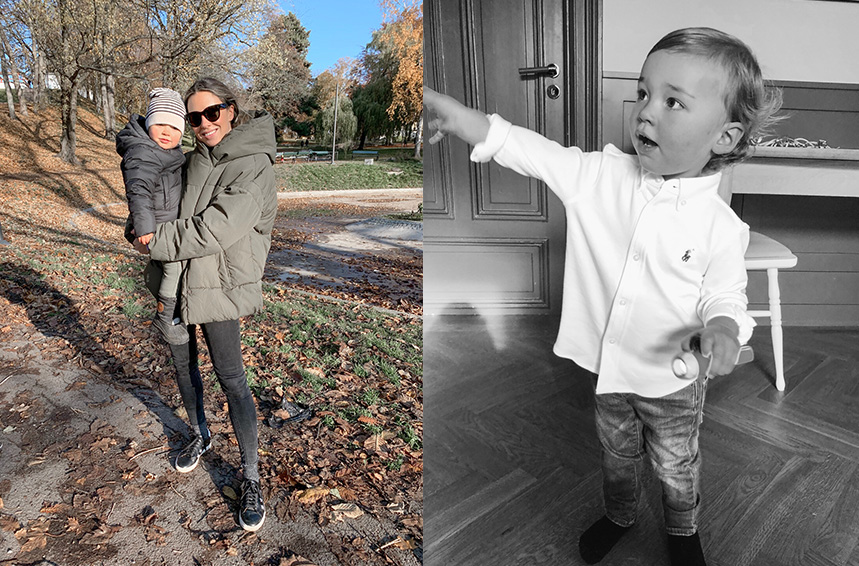 Sleep has been pretty stabile to be honest. Except if there are any illnesses, Rio sleeps from from 7-7 (and as of late, he has had some random 8/9am wake-ups!). A few months back, after he started nursery, he went through some 5-5.30am wake-ups, as he was overtired from not sleeping as long as usual at nursery (they sleep outside in their prams – which is not something which he was very used to!), but fortunately that settled after a few weeks. If he ever wakes very early during the mornings at home, we always  try to let him soothe himself back to sleep where possible (this works sometimes).

He’s still sleeping in his Boori Classic Cotbed, which has been the best investment. We also bought this toddler guard panel, but as Rio has more than enough space as it is, we will just play it by ear as and when he seems ready for it.

For the past 6 months, he’s also been using his own duvet and pillow, and I swear that’s really helped with sleep – he is just so nice and snug in there! I got the Clevamama ClevaFoam Toddler Pillow, which I was recommended, and this organic wool duvet from The Little Green Sheep – both of which Rio loves. 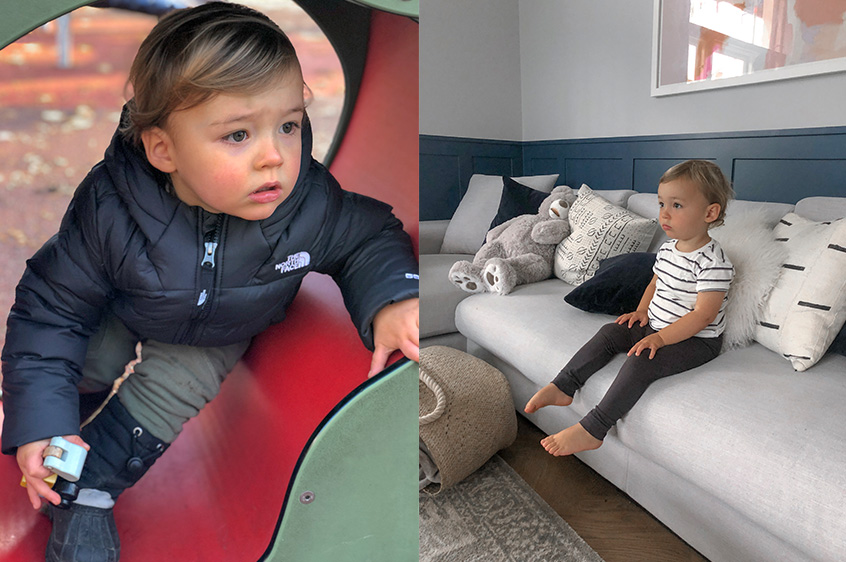 Rio’s appetite is still going strong, and in general he’s not a very fussy eater, although he’s certainly got his favourite foods! Being in nursery has helped in terms of him being pretty content sitting and eating on his own when he’s there, however when he’s at home, he does get more impatient by the dinner table (we have him in this Stokke high chair – which has been another great investment). Therefore as of late, I have been giving him different picture books to go through together by the table, which really helps with his attention span (whilst educating him at the same time). When it got really bad a few months back, we sometimes had to resort to his iPad during mealtimes (which was not something we ever wanted to do!), but since using the books, we fortunately haven’t had to use the any form of tablets or TV.

In terms of food, below are some of his current favourite meals and foods… 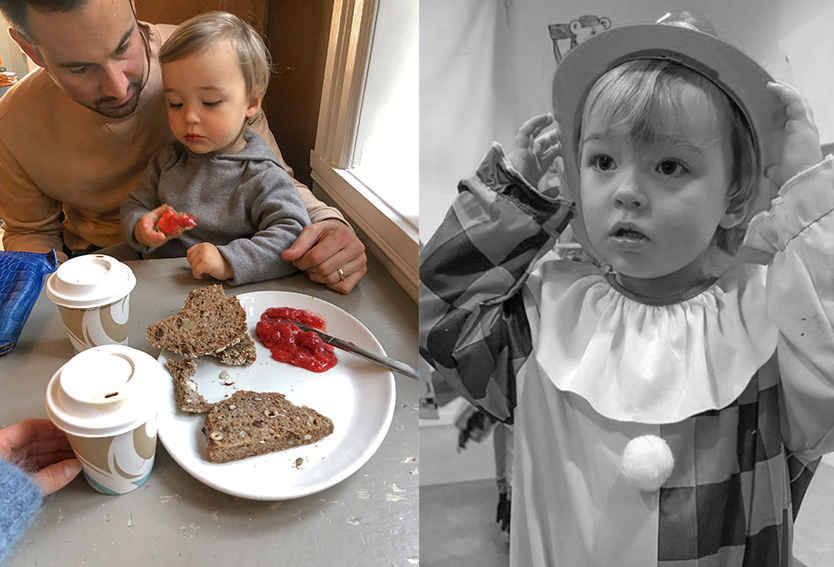 Needless to say, I’ve been very busy this past year! I thought perhaps the first year would be the hardest, and albeit it has had many challenges as well; I have definitely found 1-2 years old the hardest. Not only physically, with all the entertaining and running around, but mentally challenging as well. With Rio really developing a proper personality (strong-willed and impatient – just like his parents!), and managing the impending toddler tantrums (although we’ve not had very many – so far, that is!) – it’s been very testing for us as parents.

In terms of activities and keeping him entertained, I personally found it slightly easier when I was back in London, where I had such a strong network of mum-friends close by, various playgroups and set classes every week. When we moved to Oslo, we had 4 months before he got his spot in nursery (all Norwegian kindergartens follow the academic school year start), and this time period was definitely the hardest for me. I was back in my old city, with a baby who was a bit too old for a lot of the classes held here, and all of my friends where back working after their maternity leave. Naturally, Rio was also reacting to the big move, and when realising we weren’t just on an extended holiday, there was a lot of frustrated and angry behaviour. He’s always been an incredibly social little boy, but suddenly he moved into being very territorial and hated sharing anything (which I know is very normal for that age). Eventually, I started taking him to something which is called ‘open-nursery’, which was hosted twice a week, locally for parents within the borough we live. You had to be there with them, but it was a large play-group which lasted for 3 hours, with lots of playing, singing, dancing and then a group lunch. It started off amazing, and Rio loved it. However towards the end, when he was in his ‘frustrated/angry stage’, it became trickier with the sharing and the tantrums. I persevered though, and I’m so glad I did, as I really think it helped ease him into the main nursery (more on that further below).

In terms of toys and things he likes, it’s a typical boy; cars, tractors, trains… I mean, the obsession is real. The best buy was definitely this toy tractor. He also loves building blocks, lego and books! He really enjoys drawing too, and this drawing board has been an absolute life-saver. As much as he loves regular picture books, he’s also loved this lift-the-flap activity book, this numbers & shapes book, and this ‘you choose’ book (his all-time favourite).

In terms of general development, Rio is turning into the most amazing little boy, with so much life and character. He knows what he wants, he doesn’t miss a single trick and he is so affectionate (which I probably because I kiss and cuddle him about 1000 times a day…!). As many of you already know, we’re raising him bi-lingual; I only speak Norwegian to him and Sam only speaks British. So in terms of speech, although he’s a little chatterbox already and his understanding is amazing (for both languages), there is most likely a little speech delay going on (although I have also been told that this is myth, so who knows!). We definitely notice that his little brain is just trying to figure everything out, and he is picking up so much every day and week (as well as copying us all the time).

Lastly, I recently completed an 8-week parenting course, with the Circle of Security methodology, and it has been so life-changing for me as a parent. I now have a total different view point on parenting, what do do, how to react, and a better understanding and insight into Rio’s little world. The course is offered to parents for free in the borough I’m living in at the moment, but do check out the main site for further information and local course information to where you live. 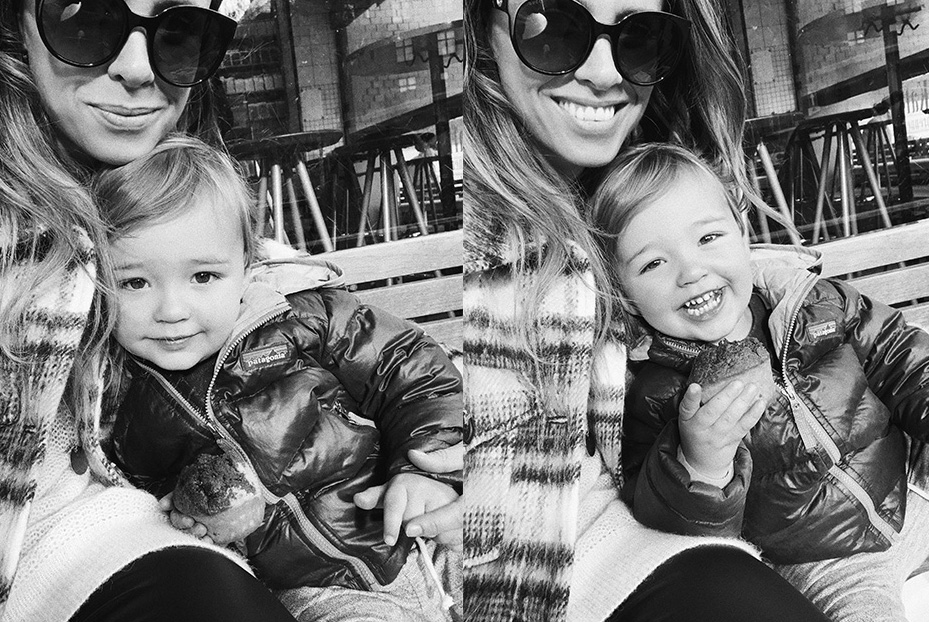 Rio started nursery the first week of August, when he was 22 months, and honestly, it’s been the best thing ever for him (I was more upset than him on that first day!). Albeit, I was very ready for him to start, as the past months had been so challenging, and was very aware that he would really benefit from the daily nursery structure. He did some weekly half-days at nursery in London, for 2-3 months, but it was not the same structure and consistency every day, and I have seen the biggest change in him (for the better), since he started back in August.

We chose a small kindergarten, with only 9 kids in in his group from 1-3 years old, and 3 nursery workers, which we’re so happy with. I wanted this kind of set-up, as he came from spending so much dedicated time with me, that I wanted that direct care-giving transition to be as similar to before. He’s not a shy boy and has a lot of energy, so he is definitely making his mark in the group, yet the level of social interaction isn’t too overwhelming, being such a small group, which feels right for his type of personality. They also work on a lot of 1-2-1 social competence, which is really helping with all his feelings and emotions (which there is, naturally, a lot of as of late!). 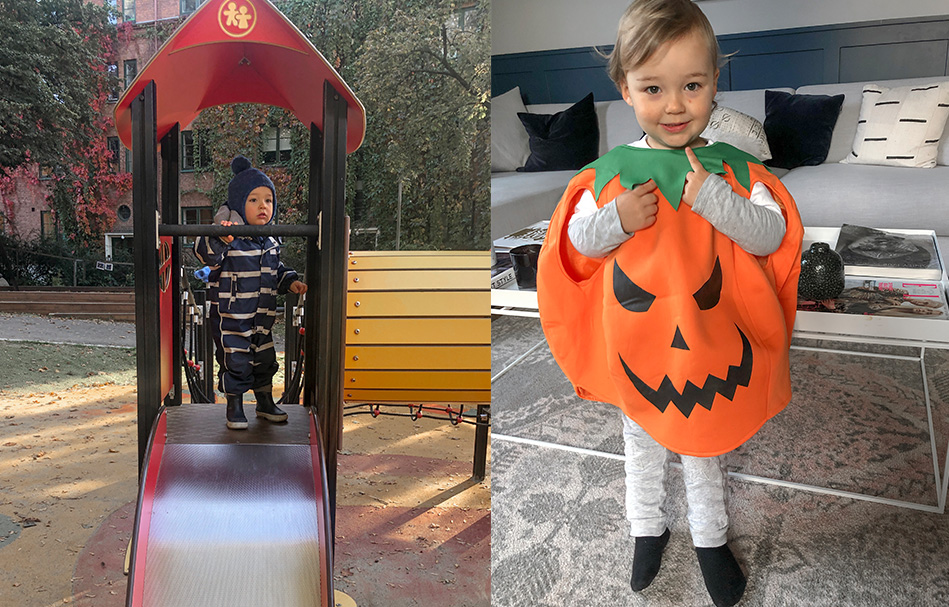 Since Rio started in nursery back in August, I have finally managed to have a consistent work-out routine going on, and to be honest, it’s now a complete non-negotiable of mine. Not only does it give me so much energy and clarity for the day, it has helped with my general mood and well-being, as well as giving me so much more strength (which I need, to carry our now, very big boy!).

Since discovering Space Pilates, an amazing boutique Pilates studio in the heart of Oslo, my body awareness (and mind) has been transformed. Not just my shape and tone, but it’s really helped with my neck tension, lower back, pelvis and hip issues… I only wish I had started this sooner after having Rio, but having done it weekly since July, it’s been a game-changer for me. Originally I was doing it every day, which was not so good for me, as my body was so tense after no breaks, so after cutting it down to 3 days a week, and combining running and yoga with it, it’s been the best combination for me. And the best part, I look forward to every session, which I truly think is the key with working out; find something you absolutely love doing, for the best results overall.

In terms of food and other heathy habits at the moment, I shared my latest health discovery and go-to morning smoothie recipe here – and I also spoke about the 5 ways I prepare for a healthy week, here – so make sure you check them out!

Please let me know if you are still enjoying these updates, and I will continue doing them more frequently, and let me know if there is anything else, motherhood related, you would like me to write about! Leave a comment below and I will take note :) 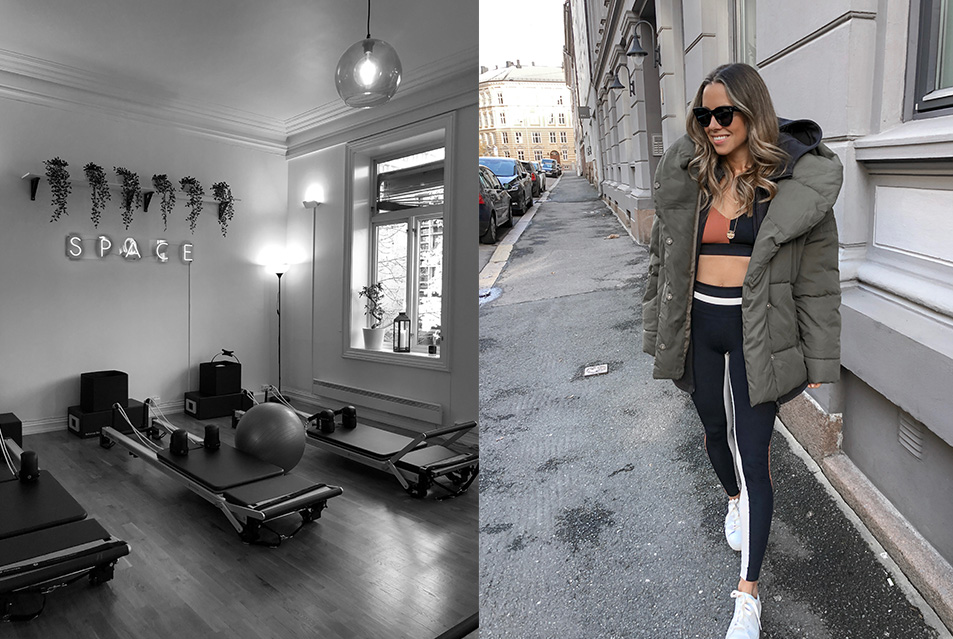