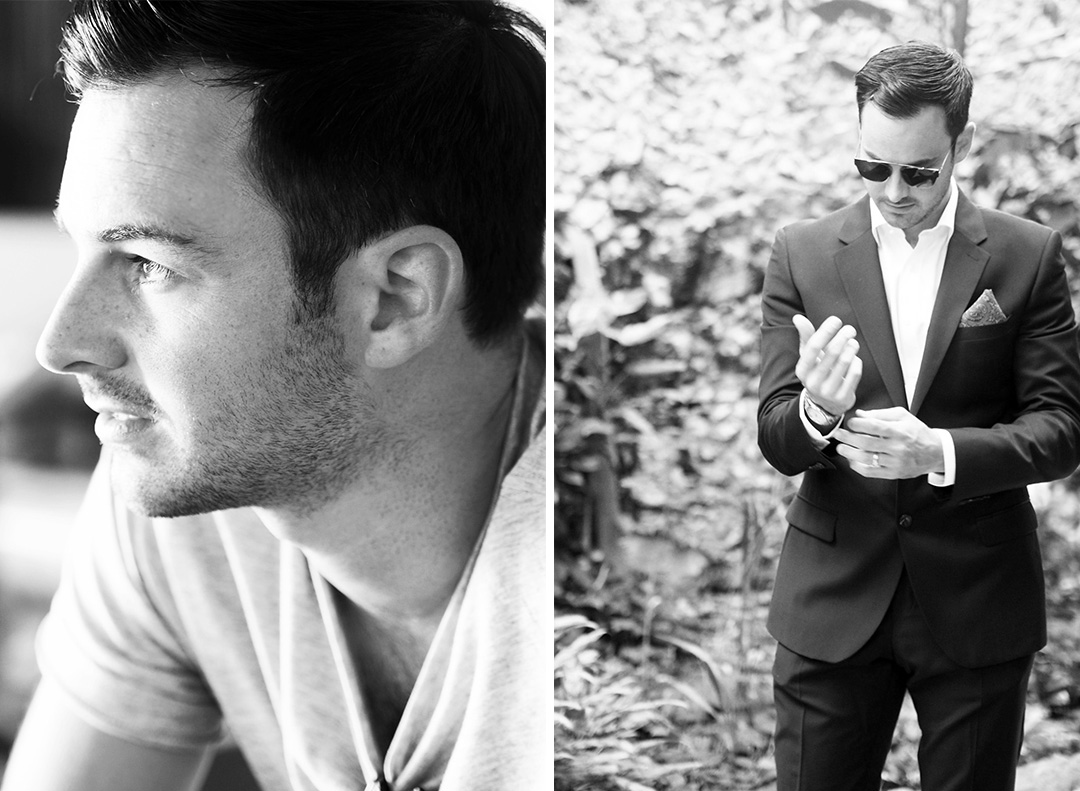 There´s been a whole lot of me since I launched the blog late 2011 – so I thought it was about time I featured my other (and definitely, better) half, for once. You might have already spotted him on my Instagram, or from our Wedding Album blog post, but that´s about it. So when I teamed up with his all-time favourite shopping website, MR PORTER, to share his go-to grooming and wellness routine (with a little help from moi), I also took this opportunity to share a snippet into our love story and a little insight into my very own, Mr. Bush. 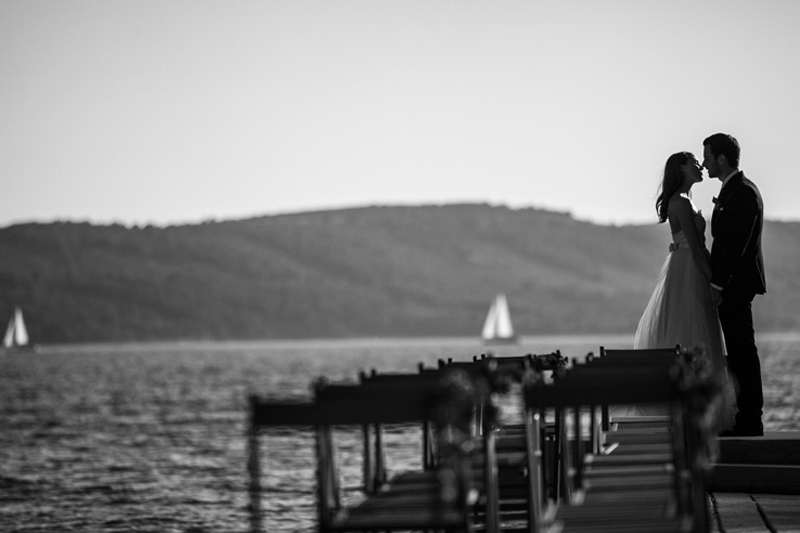 I met Sam 8 years ago in London while I was still living and studying in Barcelona, and had a long distance relationship for one year (which was definitely testing, to say the least). After completing my degree, I moved to London, and we moved straight in together. Four years later he proposed to me in New York (one of my all-time favourite cities) and we tied the knot in May 2014, on the Dalmatian coastline in Croatia (see the video here). With my roots from Norway, and Sam being half British/French – having an international wedding, was kind of a given… 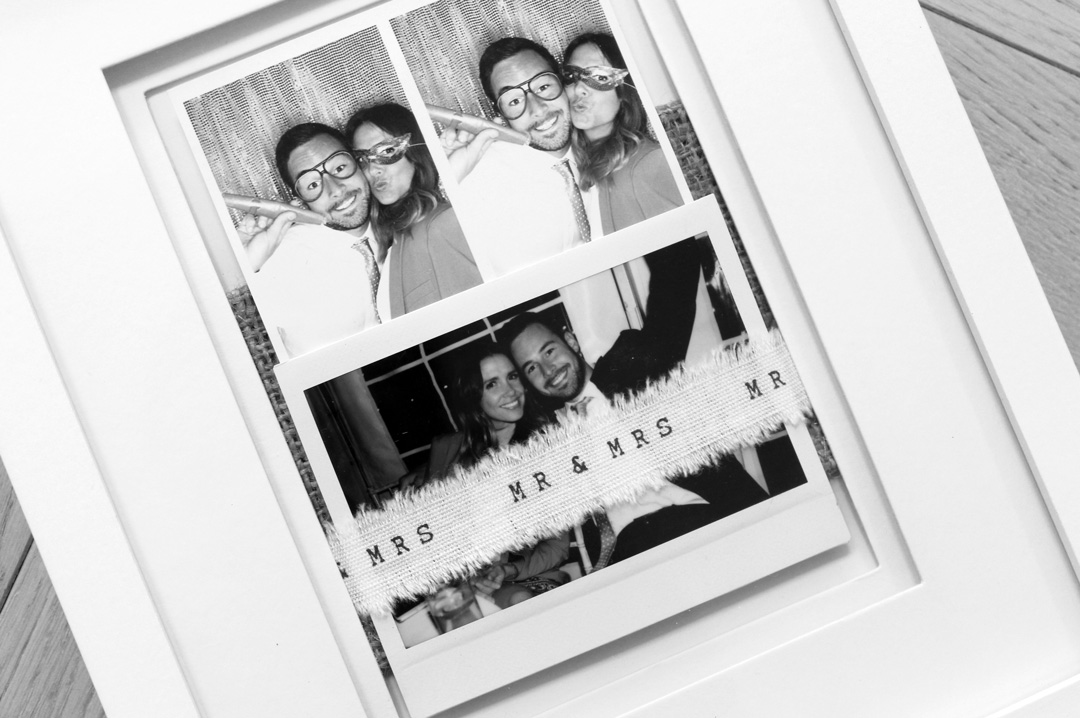 Aside from our full-time jobs, we both had a common interest in property development and interior; and in the 8 years we´ve been together, we´ve lived in, and developed five different properties in London… So there´s been a lot of moving around, to say the least! We finally found our dream house 6-months ago, and have decided to settle here for a good few years (which feels good). But that´s not to say we´re here much, as we both love and live for travelling, and in the 8 years we´ve been together, we´ve crossed the world and back (quite literally), ticking off over 20 destinations on our travel bucket list, and lots more exciting adventures to come. 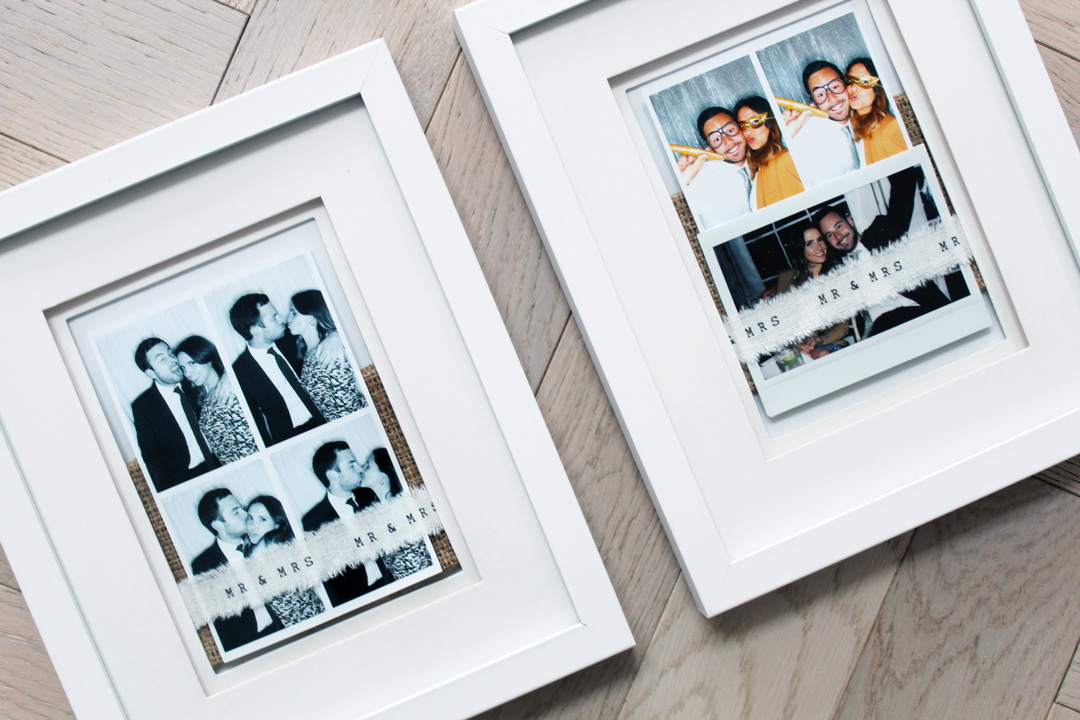 Aside from all the moving around and travelling, we do actually both work for a living (something has to pay the bills!), and Sam is by far the most dedicated, ambitious and hard-working individual I have ever come across (and I´m not just being biased here). From running his own management company at 21, to working in several leadership positions at global music establishments, heading up his own departments and teams (and he´s only 30). To say I´m proud, would be a massive understatement. 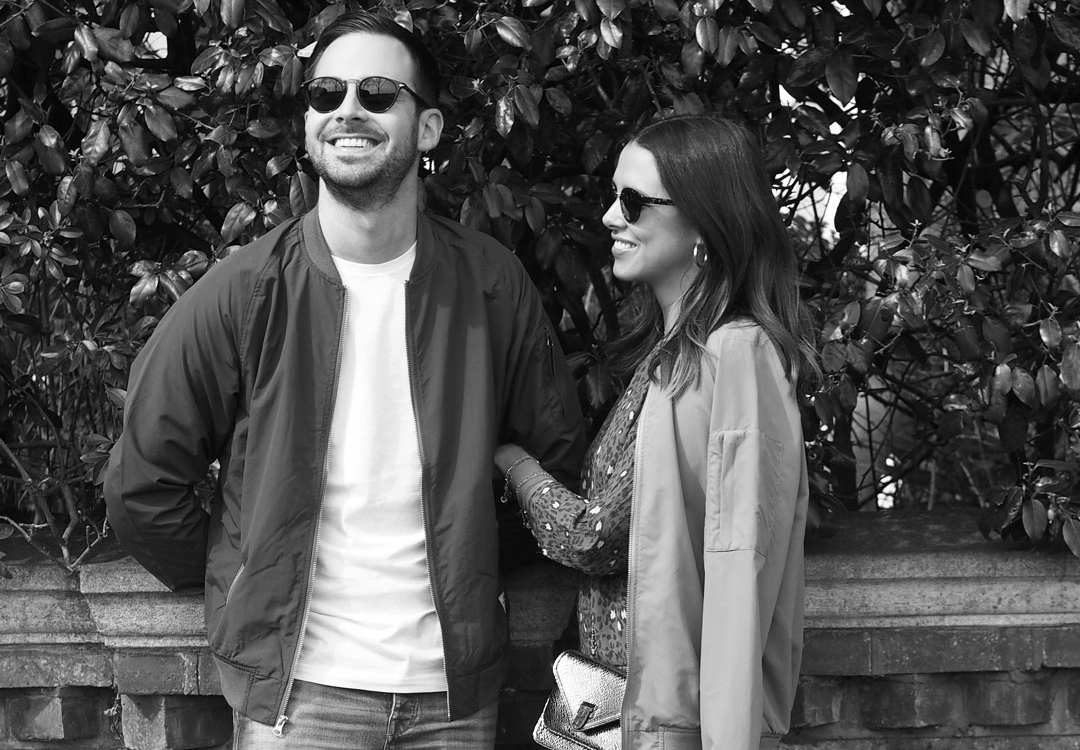 But all the hard work, long-hours and travelling, would take the toll on anyone, and it was coming to a stage where I felt I had to intervene, and make sure he was looking after himself whilst at it. As well as adopting (some) of my healthy ways of eating most of the time and getting into his fitness – my obsession with skincare has finally rubbed off on him – and after a lot of trial and error, he´s found his go-to routine (because men need lotions and potions too!). So here it is… And I hope you might find it useful too – be it for your very own number one. 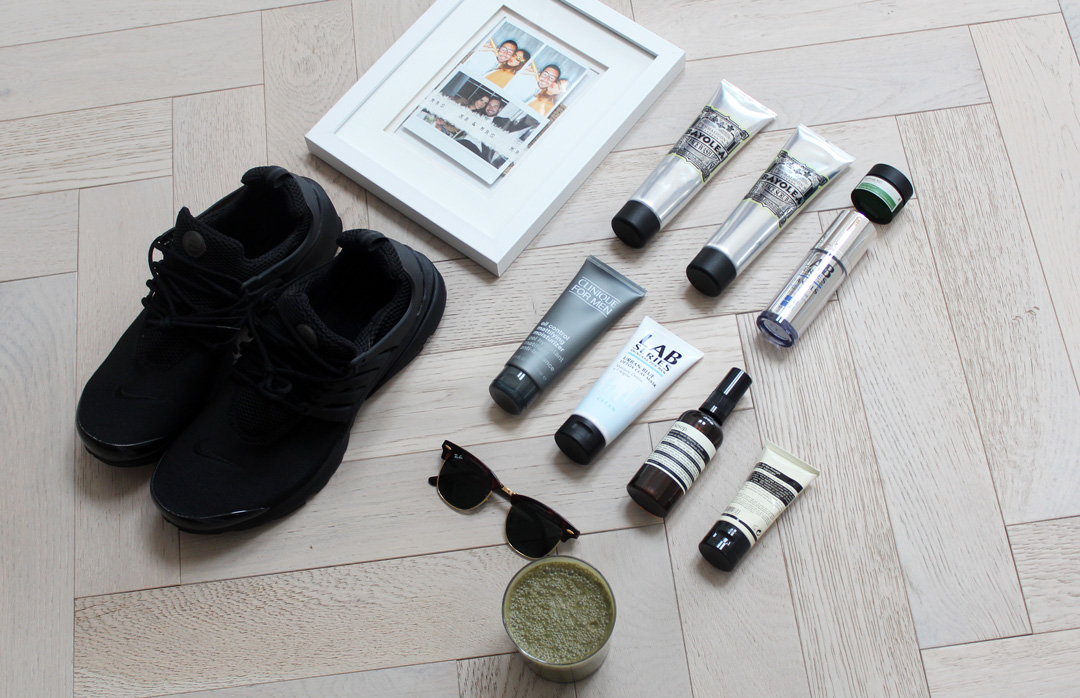 Who says skincare is just for women? I mean, why doesn’t a guy need a moisturiser, a facial, a proper clean and scrub, too? 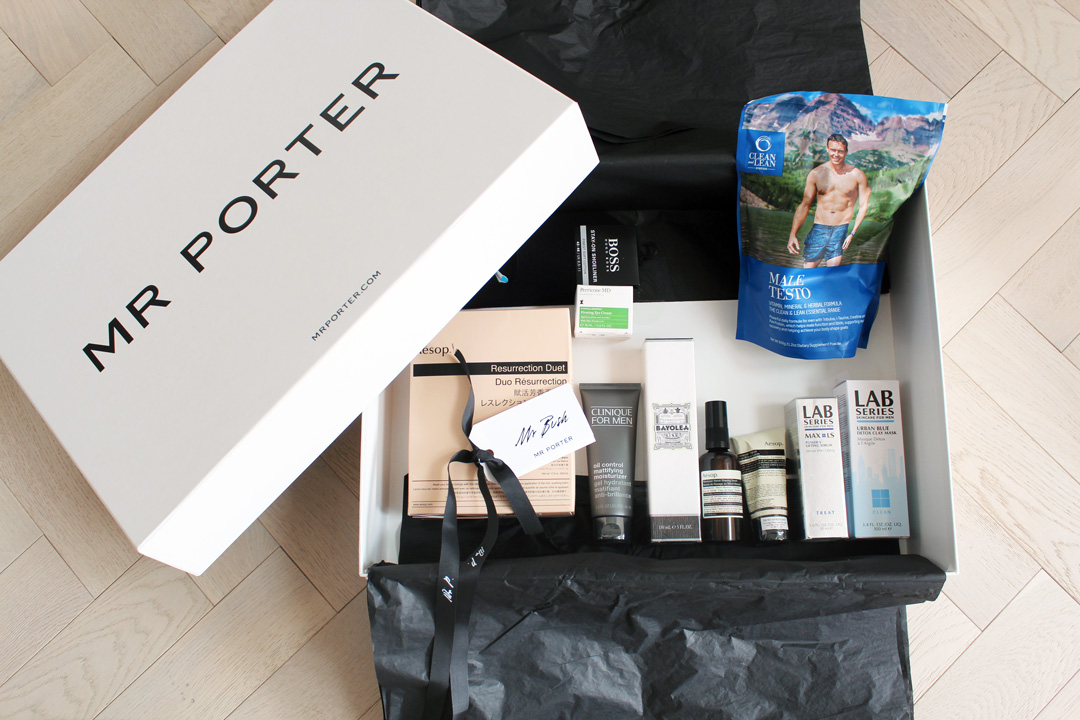 Sure, it´s a well known and common fact that men generally age more gracefully than women; annoyingly they just get even more handsome (I mean – how much better doesn’t Clooney look now than in his ER days!?). But that´s not to say they don’t need some love and care too. 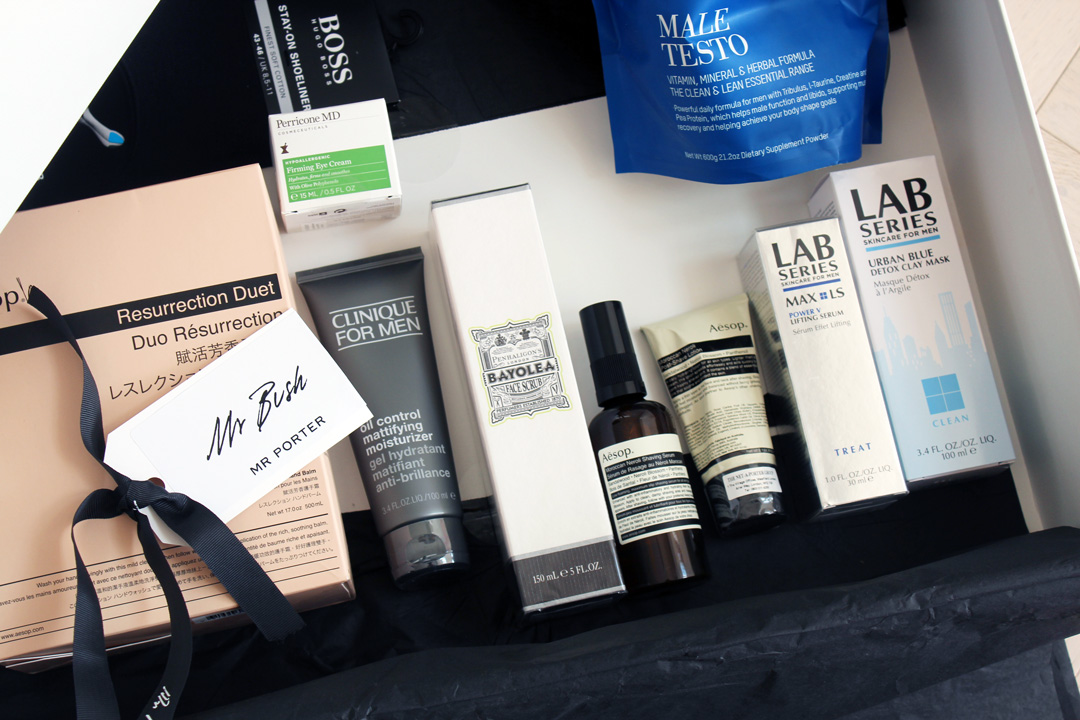 Inspired by my (pretty extensive) beauty routine – Sam put in his order via MR PORTER including long-term favourites, and some new bathroom shelf classics. 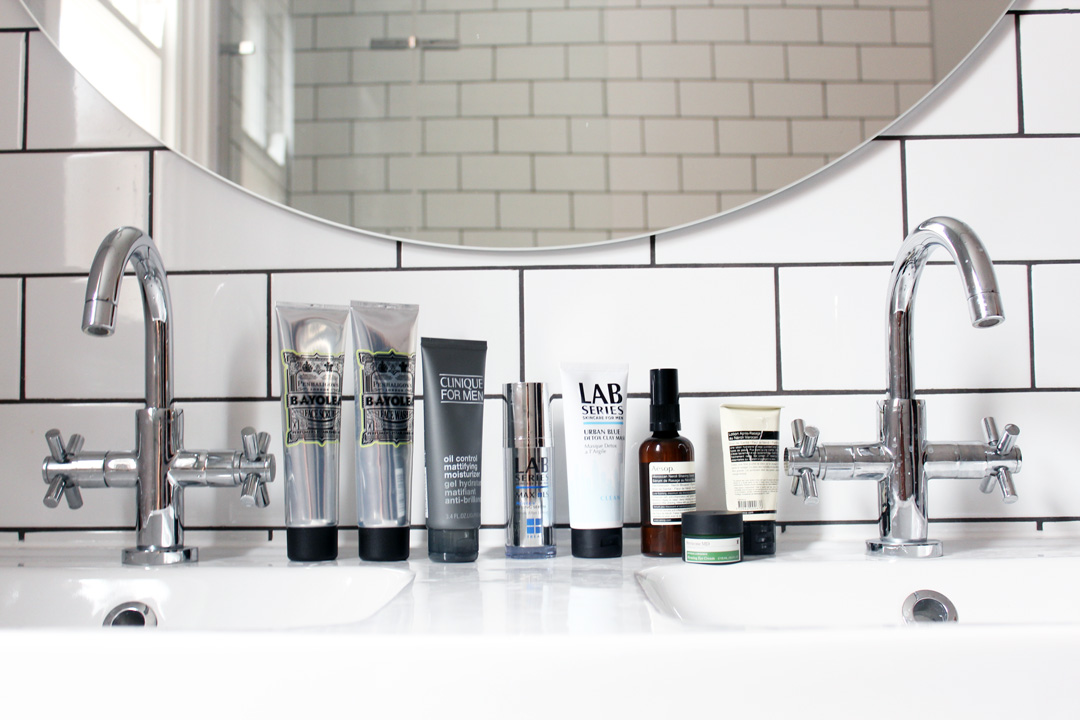 A good cleanse and a scrub is essential – especially living and working in the city. The Penhaligons Face Wash & Face Scrub work as the perfect duo, and great for every day use.

I´m all about an eye cream, and being a huge fan of Perricone MD, I made sure Sam had some in his beauty routine too; the Firming Eye Cream is another excellent product. 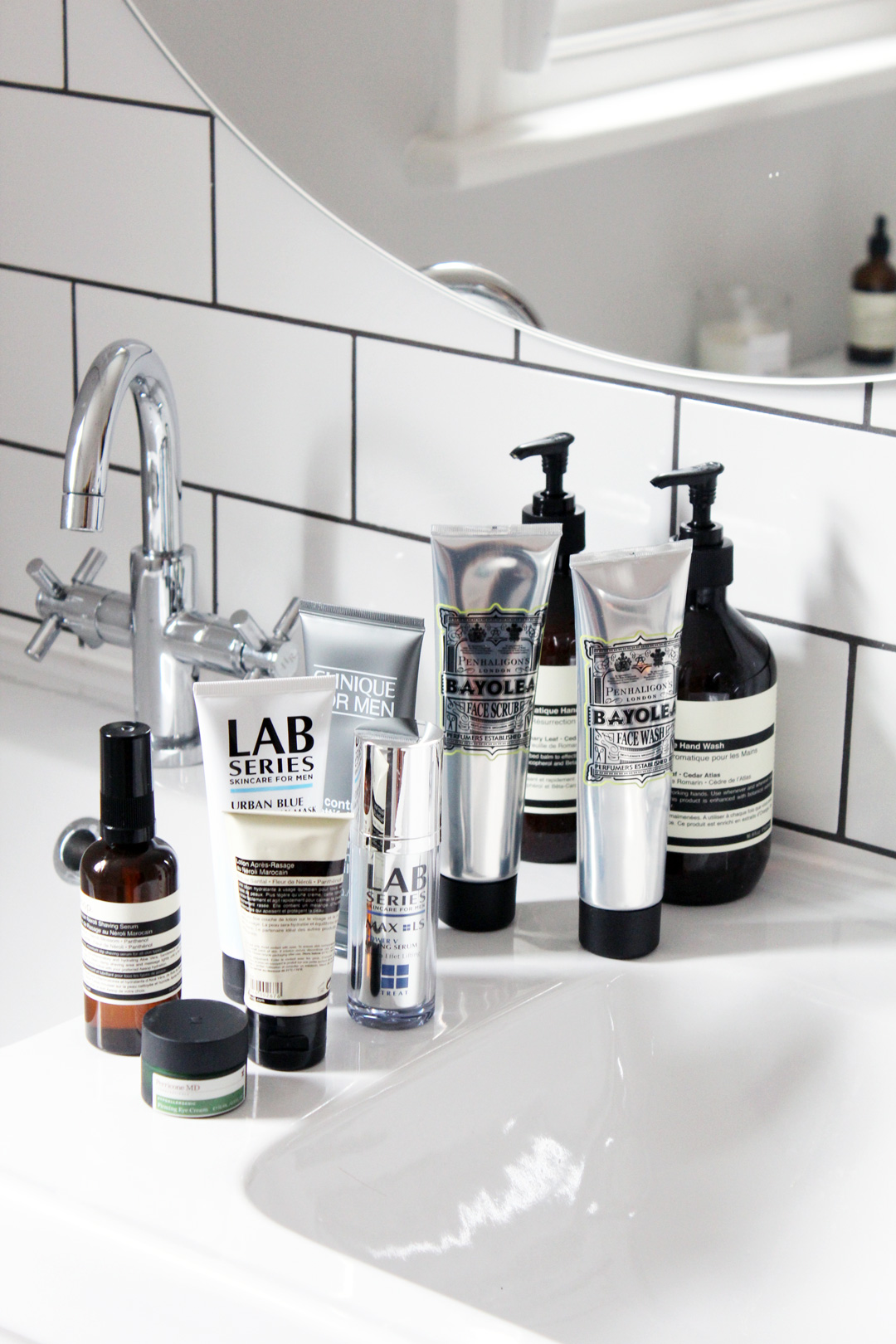 I´m a firm believer in the power of a serum – more so than moisturisers in fact. Of course, it all depends on your skin type; but if you´ve got normal to combination skin, I find using serums are enough. The Lab Series Power Lifting Serum helps firm the skin whilst intensively moisturising, leaving the skin super smooth. 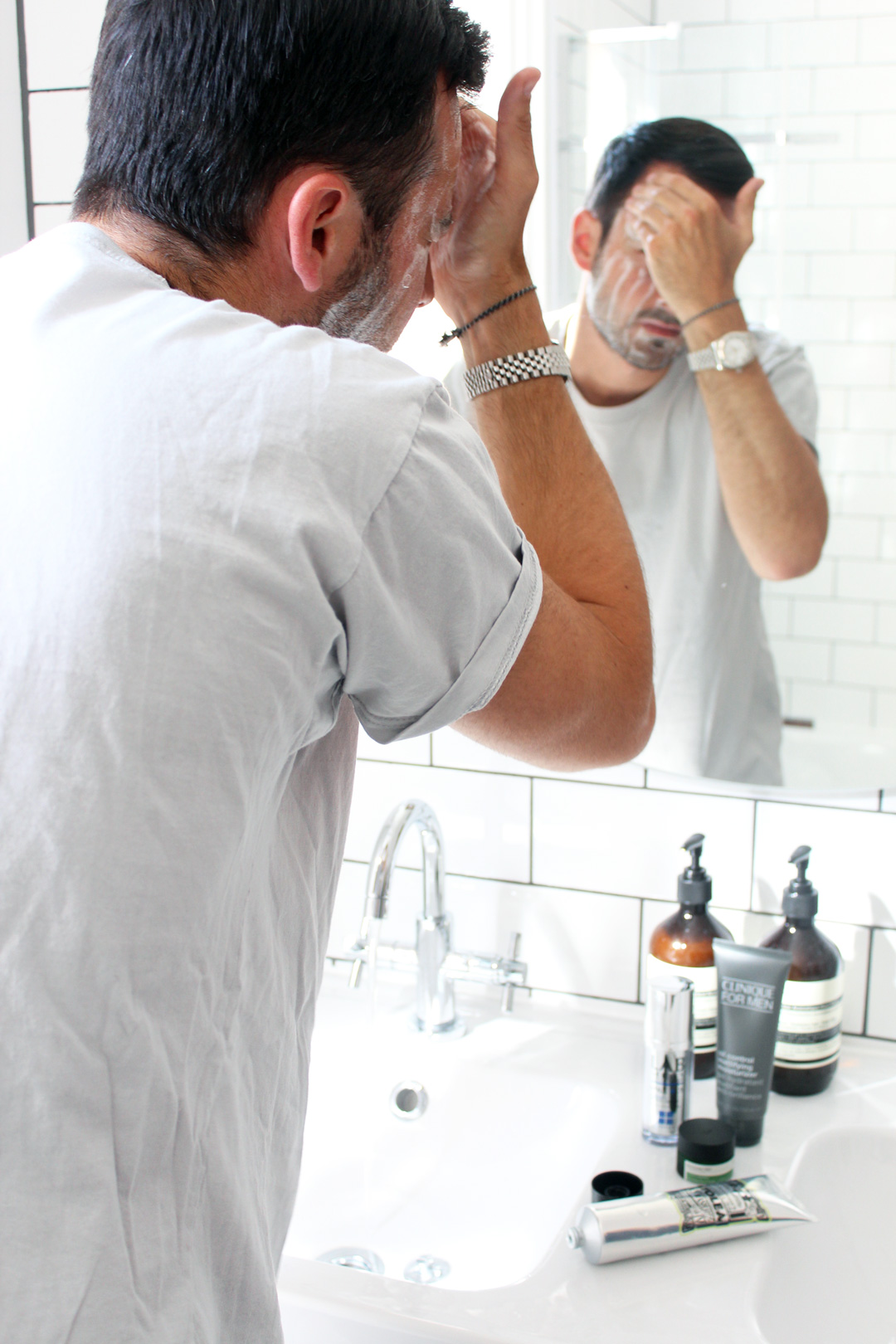 However if you do suffer from oily t-zones (especially during the summer months), the Clinique Oil Control Mattifying Moisturiser really controls the shine all day long, without leaving any greasy residue, giving that matt and smooth complexion. 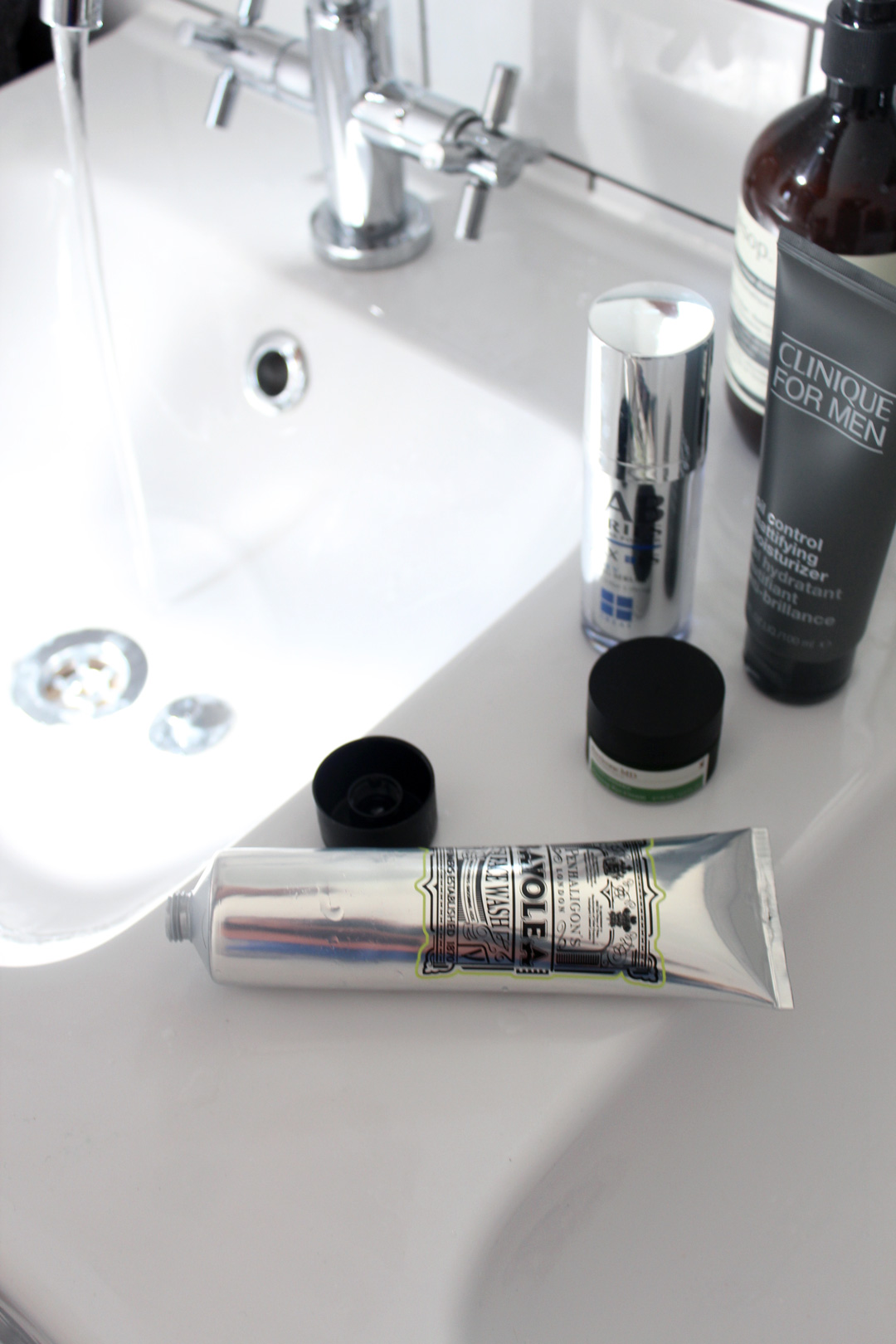 Once a week (usually on Sundays when I have my weekly pamper session), Sam loves the Lab Series Urban Blue Detox Clay Mask, which helps unclog pores, cleanse and purify.

On Monday mornings, he has his weekly shave (much to my dismay, as I love the stubble). Post-shave, he´s been using Aesop´s Moroccan Neroli Post Shaving Lotion and Shaving Serum – both of which are super hydrating, leaving the skin looking fresh and healthy. 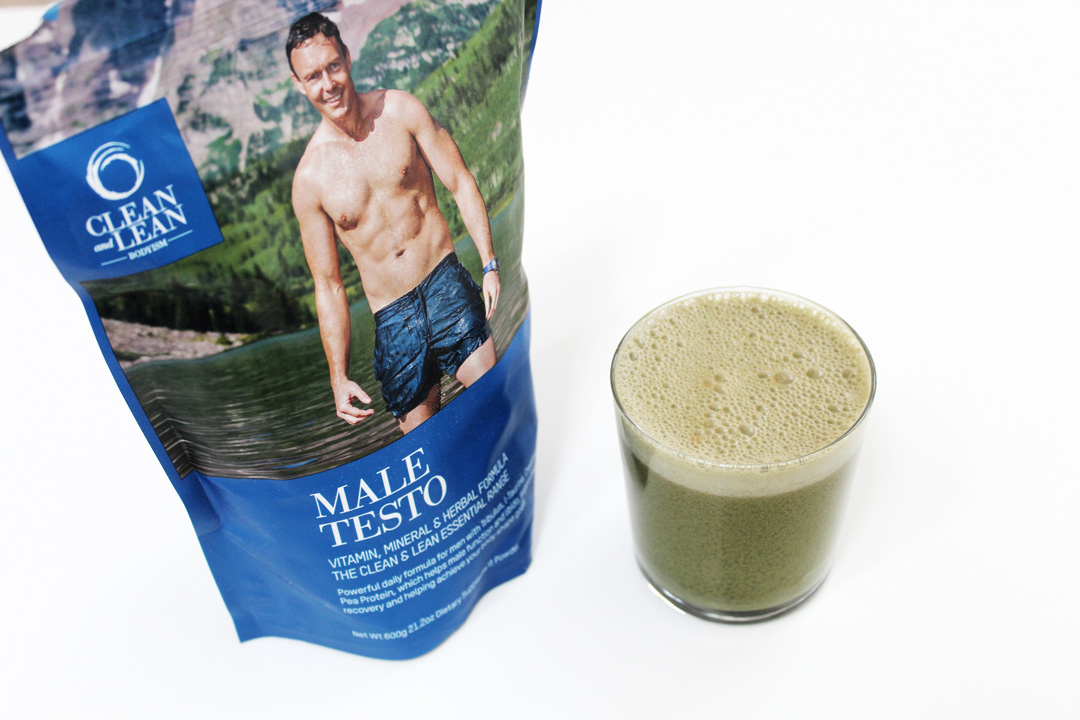 Smoothies are part of the daily rituals in Casa Bush – especially pre and post training. I personally like mine super green, with lots of different types of vegetables and herbs, such as spinach, kale, cucumber and parsley, and some avocado, banana and berries, to add that sweet and creamy consistency. Then I love to pop in some pulverised superfoods and supplements, all depending on what I fancy or time of year; be it Spirulina, Wheatgrass, Maca, Acai or some protein. 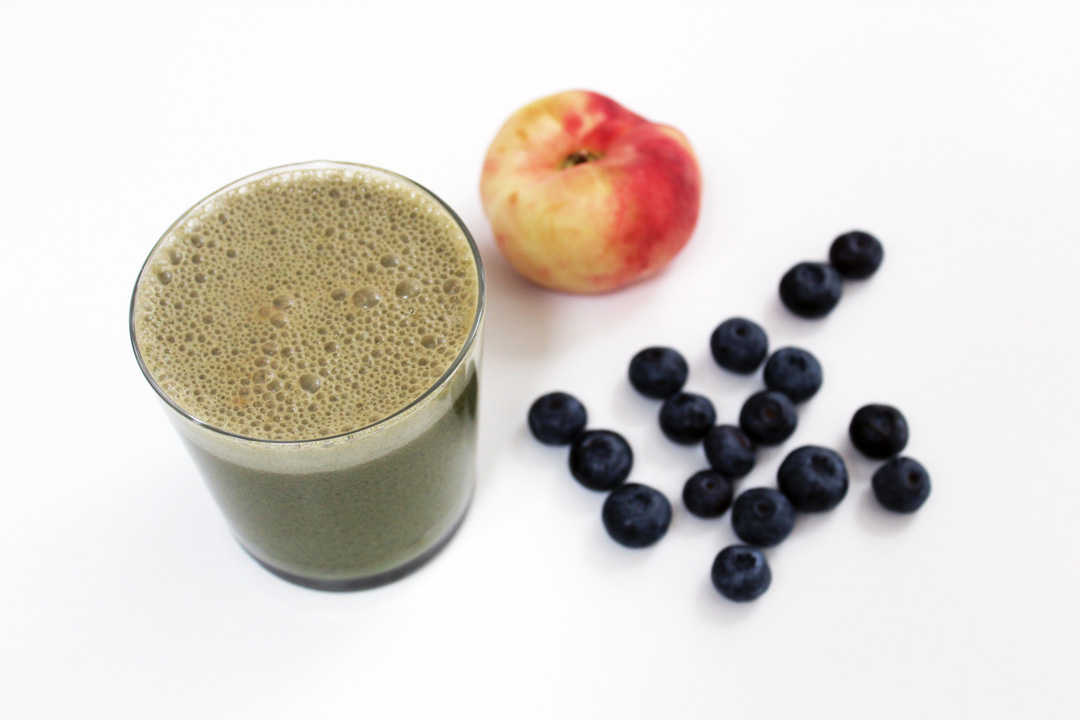 I usually create a similar concoction for Sam (although he doesn’t like it as green as I do!). Recently he´s been using Bodyism´s Clean & Lean Male Testo daily formula – which is packed with high-protein ingredients, amino acids and phytonutrient-rich anti-oxidant extracts – designed to repair and create lean muscle, improve bone density and raise the immune system as well as optimise energy levels. It´s ideal for guys on-the-go – giving them that daily boost, pre or post-training. As it´s filled with so much goodness and necessary supplements, he drinks it blended with Almond Milk. 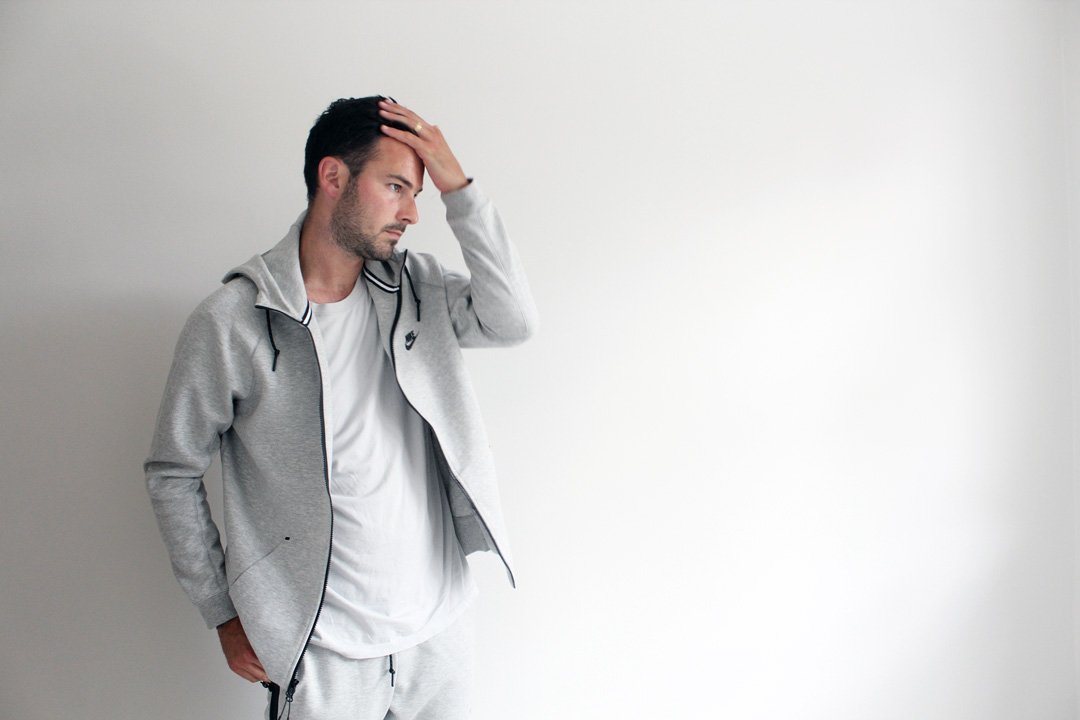 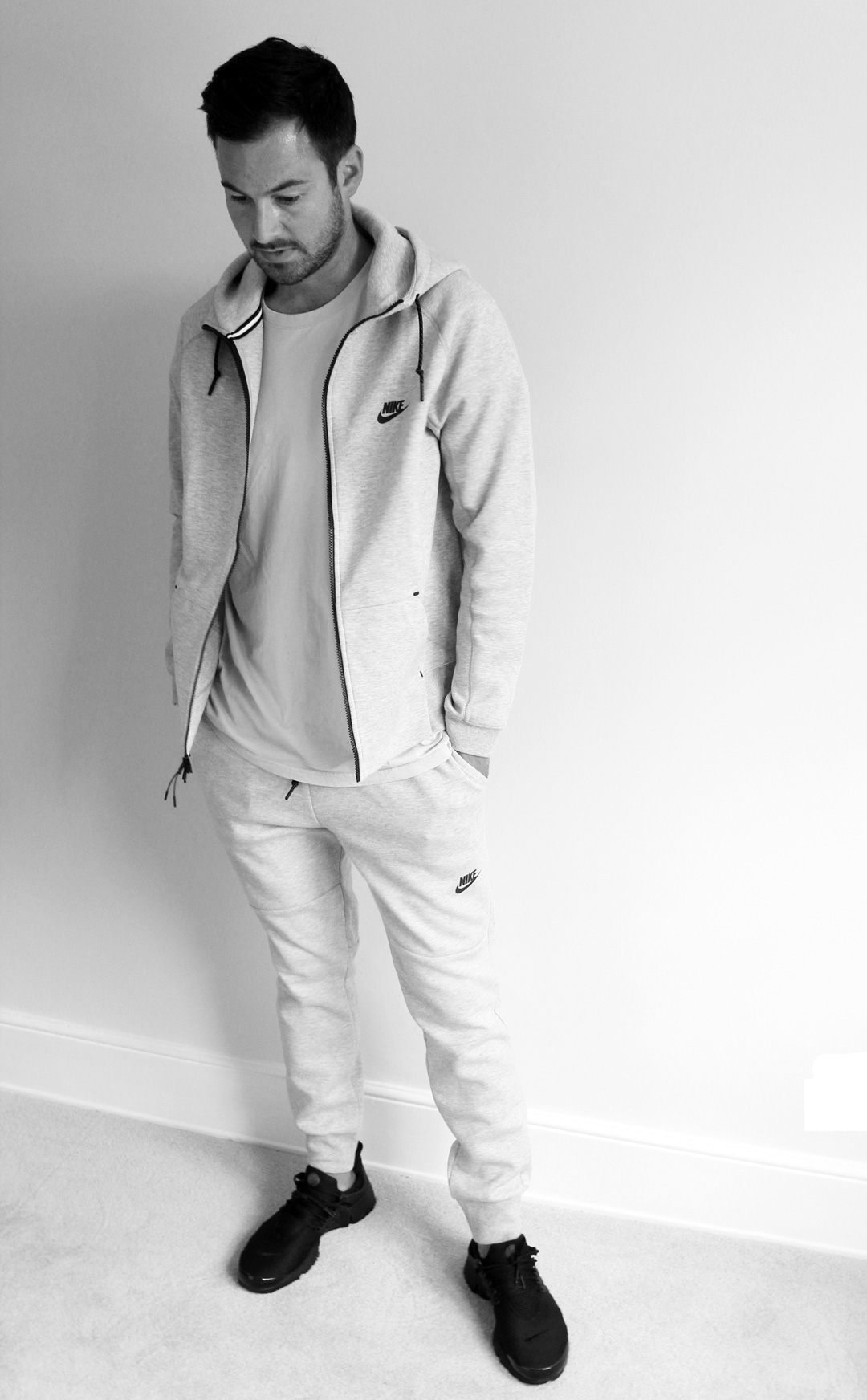 With our increasingly time-poor lifestyle, having a regular fitness routine has proven more and more difficult. But since buying our house, we´ve made one of the rooms into a fitness station – making it that bit easier (and quicker) to squeeze in a workout every now and again! Be it a weight session, HIIT training or some stretchy Yoga. 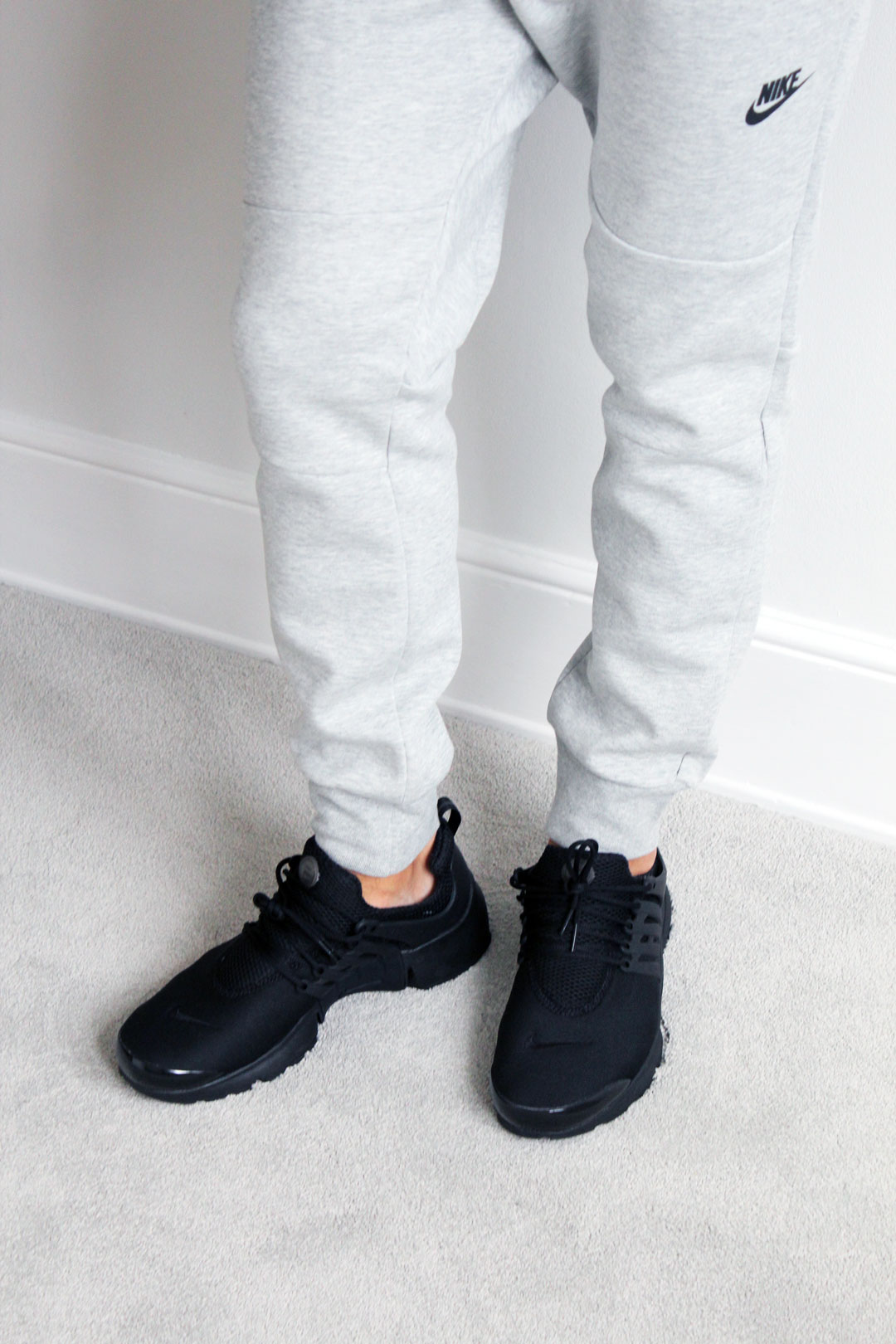 But nothing beats a bit of fresh air to clear the body and mind… We both love the fast pace and buzz from living in a city; but we´re united in being the absolute happiest when close to the nature. Every weekend we´re in London, we jump on our new bikes for a long ride, go for a run in the park, or an energising power walk along the river.

It´s all about those simple moments, right?

…and there you have it. Hope you enjoyed the little insight into our lives, and Sam. Do leave a comment below, or drop me a line, if there is anything else you want to read more about! I always love to hear from you.

Created in collaboration with MR.PORTER. All words, opinions, styling & creative direction are, of course, my own.